Skip to content
News
January 21, 2014January 21, 2014 Horsetalk.co.nz 4802 Views 0 Comments
Share
The Chinese Year of the Horse has presented equine fanatics with a golden opportunity to purchase themselves a horse-themed watch.

Manufacturers around the world have grabbed the marketing opportunity with both hands, so to speak, to market some classy offerings. 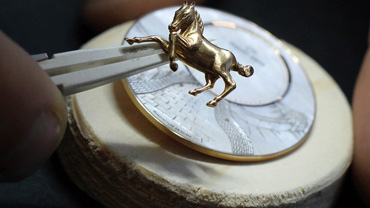 Jaquet Droz kicks off this roundup with three models in its Ateliers d’Art series, above and right, said to have been created using the exclusive know-how of Jaquet Droz’s master craftsmen, specialized in highly complex engraving, painting and Grand Feu enamel.

On each of these models, a horse’s head is also represented on the back of the white gold oscillating weight.

The dial of the Petite Heure Minute 41mm has been chosen as the showcase to depict a horse rearing up on its hind legs against a backdrop of the Great Wall of China, engraved and patinated by hand on a mother-of-pearl dial.

The horse in 18-carat red gold appears to protect the Great Wall, which is also hand engraved on the 22-carat red gold oscillating weight next to the Jaquet Droz signature of two stars.

Only 88 of each model will be manufactured.

Swiss watchmaker Swatch has come to the party with a striking offering.

As the company notes, much Chinese art is inspired by the horse and the design of its watch recalls traditional Chinese drawing and calligraphy, with its inky black brush strokes and watery grays on a white ground, with dynamic impressions of horses in motion.

Imagery of a horse in motion dominates the special packaging, too.

The watch, simply called Year of the Horse, has a white dial with black and red prints and red hands.

The case is solid matte white plastic with black and gray prints.

The strap is solid white silicone with black and gray print with a semi-transparent loop.

The enamel was then deposited into each of the hollow areas before firing, smoothing, and glazing.

The design is outlined by 78 brilliant-cut diamonds, and the watch features an alligator-leather strap and gold pin buckle.

This is a limited edition watch, available in both a white gold and pink version. It is understood 38 of each version will be available.

Swiss watchmaker Ulysse Nardin used the champlevé method to create an image of two horses on the dial of its Classico Horse timepiece.

The design was carved with a chisel directly on to the dial. The hollow areas were then filled with enamel.

Just 88 examples will be available.

If you’ve gained the impression that most of these hand-crafted watches to date are pricey, you’d be spot on.

The makers are clearly targeting wealthy and discerning Chinese buyers, with even production numbers set at numbers considered lucky.

Vacheron Constantin is also offering Year of the Horse special-edition watches, following its successful Year of the Snake offerings.

Its horse-themed collection is made up of two models, crafted in pink gold or platinum.

They are said to draw inspiration from the art of paper-cutting, or Jianzhi, first created in China.

While paper-cutting is not featured within the 40mm case, the art form is emulated with enameling and hand-engraving works on the dial.

The watches have a leaf motif, stemming from classic Chinese iconography, with raised bamboo stalks that appear to be floating over the dial. Both features are directly engraved in the gold dial. Then a horse, positioned as if ready to gallop, is placed in the middle of the dial.

In all, four windows show the hour, the minutes, the day and the date respectively.

There will be only 12 available in each color, with Vacheron Constantin’s website featuring a special series of images detailing the hand-crafted production process.

Swiss firm Chopard is offering this equine-themed watch in its prized Urushi series.

The series is named after the Urushi method of lacquer art used on the watch. This version also follows a successful Year of the Snake edition.

The watch is 39.5mm wide and 6.8mm thick, with a black alligator leather strap.

Chopard is presenting it in a black and Maki-e gold box featuring an auspicious octagonal shape.

The watch face also includes the use of gold dust, gold foil and mother-of-pearl.

The price? It has been reported the watch is expected to sell for around $US25,000.