Champion Irish racehorse St Nicholas Abbey has died following a bout of colic on Tuesday morning, after months of struggle to survive against the odds.

Surgery on St Nicholas Abbey revealed a severe strangulating colon torsion that was unviable, and he had to be euthanized on humane grounds.

“This is extremely unfortunate as St Nicholas Abbey had been in terrific form, the laminitis was resolving very well and the fracture had healed better than expected,” Coolmore stud said, referring to laminitis which developed after a previous colic attack in November.

St Nicholas Abbey shattered his off fore pastern while exercising at Ballydoyle in Ireland, the racing arm of Coolmore Stud, in his final hit-out before Royal Ascot in July 2013.

Just two days after he underwent a major leg operation at Fethard Equine Hospital in July, he had to have emergency surgery to be treated for colic.

He then developed mild laminitic changes in his near fore. He had been walking well on his fractured leg, which had healed very well.

Another setback occurred in August when a steel weight-bearing pin in a cannon bone had broken.

The seven-year-old bay stallion was one of the biggest money-winning horses in European racing history, earning £4.95 million (about $US8 million) and winning nine races before his devastating injury.

Coolmore thanked the surgeons, international experts and  staff at Fethard Equine Hospital “who gave him such excellent care 24/7”.

“We would also like to thank the multitude of well-wishers for all the cards and messages of support for St Nicholas Abbey.” 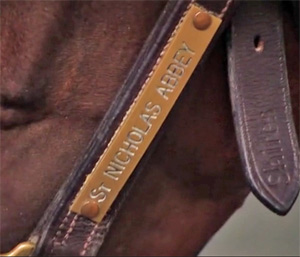 Epsom racecourse tweeted: “We’re all saddened to hear that St Nicholas Abbey has lost his battle today and will forever hold fond memories of his three Coronation Cup wins.”

St Nicholas Abbey, who was bred in Ireland by Barton Bloodstock & Villiers Syndicate, was by Montjeu out of Leaping Water, by Sure Blade. He is to be buried in the graveyard at Coolmore in County Tipperary, in Ireland.