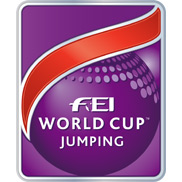 Olympic showjumper Samantha McIntosh is thrilled with the first double clear by her mare Estina, who won the New Zealand World Cup class at the Royal A&P Show in Feilding on Saturday.

The nine-year-old Belgian imported mare headed home 12 other combinations. While Estina can be a tricky ride, she was superb on Saturday night. They are heading into their third season together.

“I think the Australian tour over the winter months really helped her grow up a lot,” McIntosh said. “She is a handful, but when she is good, she is very good!”

The combination have been knocking on the door for a while, but the double clear remained elusive … until now.

“It’s cool it all came together today.”

While McIntosh has no real plans to chase the New Zealand World Cup series, most of the classes are at the “better” shows.

“I prefer to choose courses that suit my horse and her development, so we will see.”

With her other mare Claire out for the rest of the season with injury, McIntosh has recently paired up with Argento who she sees as another potential top horse.

“I would like to have a crack at a world cup with her too,” she said.

But the day belonged to Estina. In the first round, just Estina and former multi-series winner Katie McVean and Dunstan Kiwi Iron Mark were clear. Last season’s series’ victor Maurice Beatson and My Gollywog had a single rail to carry four faults through, as did current series leader Susie Hayward and Andretti.

Eight combinations came back for the second round which saw just McIntosh and eventual second place-getter Beatson go clear over the Gary Sinclair designed course – McIntosh in 66.56 seconds, and Beatson in 62.89 but with four faults.

McVean and Iron Mark were the fastest in the against-the-clock round with their 57.72, but paid for their speed with eight faults.