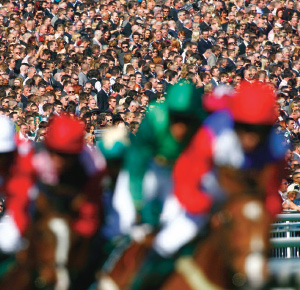 A British trainer handed a five-year ban by racing authorities injected four horses himself with a human preparation containing the anabolic steroid, stanozolol, it has emerged.

The Disciplinary Panel of the British Horseracing Association announced today that Gerard Butler would be disqualified from the sport for five years.

Butler had admitted all seven charges against him relating to the finding of an anabolic steroid in samples taken from nine horses in his care or control.

In four cases the substance was later identified as Rexogin, which was injected by Butler himself.

In the five other cases the horses were identified as having been treated with Sungate on veterinary advice. Both products contain stanozolol, a prohibited substance.

The asssociation’s integrity director, Adam Brickell, said: “The most serious charges related to Gerard Butler’s gross failure to look after the best interests of four horses in his care, which amounted to conduct that was seriously prejudicial to the integrity, proper conduct and good reputation of the sport.

“The gravity of the breaches of the Rules of Racing escalated when, in the course of cross-examination during the Disciplinary Panel hearing, Butler finally provided evidence as to where he had purchased the drug in question from, and admitted that the product he had administered himself to four horses was not the equine veterinary product Sungate, but instead an unlicensed stanozolol-based product called Rexogin, manufactured for use in humans.”

The panel noted that Butler had administered this product by injection into joints using a method restricted by law to qualified veterinary surgeons.

The panel also pointed to the fact that Butler took no veterinary advice before carrying out these procedures, did not have the horses properly assessed prior to their treatment, made no recording in his medication records of having injected the horses, and that he subsequently allowed the horses to be treated by veterinary surgeons without informing them of the prior administrations.

The panel said it was not appropriate for a trainer to say he was able to undertake an invasive veterinary procedure on the basis that he had seen veterinary surgeons performing the procedure.

He created unnecessary risks for the horses in obtaining the drug from an unlicensed source and his behaviour in administering the injections was consistent with the underhand and covert manner in which he purchased the drug, the panel found.

Brickell continued: “Taking this all into account, the panel summarised that the actions of Butler represented ‘an appalling breach of his duty to look after the interests of the horses in his care and amounted to conduct that was seriously prejudicial to the integrity, proper conduct and good reputation of horseracing in Great Britain’.

“The charges also related to five other positive samples taken from horses which were administered Sungate on the advice of and by a veterinary surgeon.

“The rules are clear that the licence holder, in this case Butler, is wholly responsible for the presence of prohibited substances in horses in his care and control.

“However, it remains of concern to the BHA that a practising vet regularly treating racehorses, and therefore presumably familiar with the rules, should have recommended and administered such a product to a horse in a trainer’s care or control.

“This is an area we are continuing to explore and consult on with a view to strengthening our position. If the Royal College of Veterinary Surgeons chooses to follow up on this specific matter we would assist as required, as we have done on previous occasions.”

The panel noted that it was only when questioned at the hearing that Butler revealed for the first time that he had purchased the stanozolol online from the UK Steroids Pharmacy.

He did not in fact purchase Sungate, but a preparation called Rexogin which contained stanozolol at a concentration that was ten times that of Sungate.

The UK Steroids Pharmacy website is directed at body builders and made no reference to the veterinary administration of the drugs.

The panel said it was extremely concerned by Butler’s revelation that the Rexogin preparation of stanozolol that he purchased was ten times the concentration of Sungate.

“Butler confirmed that he injected the fetlock and knee joints of the affected horses on two occasions in December and January. He admitted that he took no veterinary advice before giving the concentrated stanozolol,” the panel found.

“He admitted knowing that veterinary surgeons are cautioned not to exceed the recommended dose of Sungate and that he did not know of anyone else who had given Rexogin in this way before.

“Butler admitted that for each of the four horses, they had not been given a full veterinary assessment and no other treatments had been tried by the veterinary surgeons prior to the administration of stanozolol.

“Moreover, Mr Butler admitted that he had allowed the four horses to be subsequently treated by the veterinary surgeons at Rossdales without them having any knowledge of his prior administration of Rexogin.

“In the panel’s view, Butler’s actions in giving Rexogin were an appalling failure to act in the best interests of the horses in his care.

“Butler was questioned at the hearing as to his previous experience of administering drugs to horses. He acknowledged that he had never given an intra-articular injection to a horse before injecting the four horses with Rexogin. He said he had been present at hundreds of such injections … and felt able to undertake the procedure without training or professional supervision.

“He accepted that he knew what he was doing was wrong but asserted that the primary reason he did not use a veterinary surgeon was in order to try and keep the veterinary bills down for a particularly difficult owner.”

The panel continued: “Butler’s evidence revealed an appalling dereliction of his duty as a licensed trainer. By his own admission, Butler kept no clear financial records or any invoice from the purchase of the Rexogin, he did not have the horses properly assessed prior to their treatment and made no recording in his medication records of having injected the horses.

“He used junior stable staff to help him who would not question his actions and deceived his senior stable staff and kept from them important information about the treatment given to the horses.

“In addition, notwithstanding the therapeutically uncertain effects of the high doses of stanozolol, he allowed the four horses to continue to be treated by the veterinary surgeons who had no knowledge of the concurrent use of Rexogin.

“In the panel’s view, Butler’s actions were an appalling breach of his duty to look after the interests of the horses in his care and amounted to conduct that was seriously prejudicial to the integrity, proper conduct and good reputation of horseracing in Great Britain.

“As the veterinary surgeon who gave evidence on Butler’s behalf acknowledged, the four horses were not damaged but this was ‘more by luck than any judgement’.

“Butler’s cavalier approach to his ability to give an intra articulation was a particular concern to the panel.”

Butler, by his own admission, illegally administered this drug on 16 different occasions.

The panel imposed a five-year ban, saying he had 48 hours to arrange the relocation of his horses.