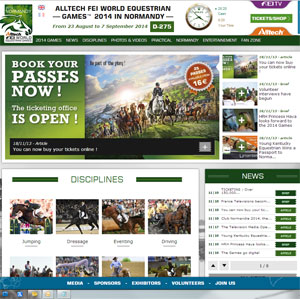 Half of the passes offered for sale for the 2014 World Equestrian Games in France sold within a day, organisers say.

Buyers flocked to the official website for the event to grab one of the 15,000 passes available on Monday, causing the event’s new website to have problems.

With nine months until the event start, the Normandy 2014 Organising Committee has already recorded 102,000 pages viewed on the ticketing site and sold 150,000 places for the various competitions.

In less than 24 hours, half the proposed passes (15,000) had been reserved by internet users, from around the world. In total, over 15,000 places were bought in this way in a matter of hours, enabling the organisers to exceed the target of 150,000 tickets sold.

At 1400 GMT on Monday, the official website recorded 2000 simultaneous connections, over double the normal visitors. Ahead of such a success, the organisers are already considering extending their offer, so as to be able to meet demand. Some 200,000 places will remain allocated for the third and final stage of the ticketing operation, where the tickets will be sold individually at the start of March 2014.

The first phase of ticketing, launched on June 6, was reserved for members of national equestrian federations.

More than 60 nations and nearly 1000 athletes will compete in front of an expected 500,000 visitors.

At the weekend, FEI President Princess Haya congratulated the Normandy 2014 Organising Committee on the launch of its new website.

“This imaginative site will offer fans and athletes from all over the world  an opportunity to discover all the relevant games information on all of our disciplines in one place.

“For those of you fortunate enough to visit France next year you will have at hand everything needed to make your experience in Normandy a success. I look forward to seeing you all in the beautiful Normandy setting next year, which I am sure will be a landmark equestrian event.”
WEG Box Office