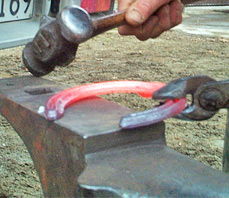 The laws under which farriers operate in England, Scotland and Wales are being reviewed.

The profession is regulated under the Farriers (Registration) Act 1975.

It is a criminal offence in Britain for anyone other than a registered farrier, approved farriery apprentice, veterinary surgeon, or student veterinary surgeon working under supervision to shoe a horse or carry out farriery unless required in an emergency.

The Department of Environment, Food and Rural Affairs (Defra), in parallel with teams in the Scottish and Welsh governments, have launched a consultation that sets out proposals for regulatory reform of the act.

The Farriers Registration Council, which is the statutory regulator for the profession in Britain, says the act has had a positive impact on the welfare of horses. However, several developments over the years and reforms to the regulation of other professions, including those for veterinary surgeons, have left some arrangements for the regulation of farriers out-of-date and at risk of legal challenge.

The council therefore sought Government help to remedy what it sees as deficiencies in the act.

“The overall aim will be to modernise the regulation of the farriery profession, greater protecting the public interest and reducing burdens upon the regulator,” the council said in a statement.

It said the purpose of the consultation was to set out proposals for change and to seek views on the way forward, including necessary amendments to the act.

The outcome of the consultation will assist in formulating the final proposal that Defra will then put before the government, most likely as a private members’ bill.

The consultation is likely to see input from barefoot trimmers and their supporters, some of whom are critical of the level of protection afforded the industry. There remain questions, too, over what is defined as a horseshoe.

The council’s view is that glue-on plastic shoes and hoof wraps – bandage-like material impregnated with resin which dries hard around the hoof when wet – are horseshoes, along with the more traditional shoes and racing plates.

Defra says the review will focus on the governance, structure and operation of the council, with a view to remedying several deficiencies.

It said views expressed in the consultation would contribute to a robust evidence base and would be scrutinised carefully and rigorously to assist in forming its final views and proposals for amending the act.