Could Princess Haya be persuaded to change her mind and seek a third term at the helm of the International Equestrian Federation (FEI)?

It is a tantalising question.

As delegates filed into the auditorium in Montreux, Switzerland, for today’s proceedings at the FEI General Assembly, the big unknown question was just how far the various member-nations, or more specifically their respective group chairs, would go in voicing support for Haya. 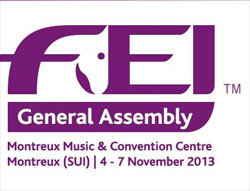 Sources suggest there is wide support for the princess, and hopes remain that she could be persuaded to change her mind.

Will member-nations voice the wide support for her presidency, or even go a step further and urge her to reconsider her decision not to seek a third term when her time in office ends in 12 months?

There has already been one attempt to persuade Haya to stay on. Yesterday, Sheikh Khalid, of Bahrain, made an impassioned plea for the princess to reconsider. His speech was reportedly greeted with rapturous applause.

Haya announced late in September that she would relinquish the post next year, at the end of her second four-year term, as required under the FEI constitution.

It was the Jordanian-born princess who, in her first meeting in Lausanne, Switzerland, with the FEI Bureau in 2006, proposed limiting FEI presidents to two four-year terms.

The constitution was duly changed, but all group chairs unanimously agreed this year to pursue a constitutional change that would have allowed the president a third term.

She said at the time: “Whilst I very much appreciate and am honoured by efforts of the FEI Regional Group Chairpersons and the National Federations to amend the FEI Statutes to permit me, or any FEI president to seek a third term, my views on the benefits of a two-term limit have not changed since the day I was elected.

“I suggested that reform, which was later adopted as an FEI Statute, because it is essential to ensure fresh thinking and avoid a sense of entitlement within the leadership of an international sport federation.”

Haya explained that she loved being FEI president and was passionate about the work.

“I love the people I work with at the national federations and at headquarters. However, I cannot in good conscience put aside my beliefs and the commitment I made seven years ago now that the term limit I supported applies to me.”

Haya’s announcement appeared unequivocal, but several national federations entertain hopes that the princess could be persuaded to reconsider, for several reasons.

She is considered to have performed very well in the role, especially so in her second term, and is a well-respected member of the International Olympic Committee, where she is a strong advocate for equestrian sport. She is a well-connected member of a royal family and was instrumental in attracting sponsorship worth tens of millions of dollars to the FEI.

To date, no obvious candidates to replace her have emerged.

Could a strong show of support make a difference? Some delegates remain hopeful that this might at least get her to reconsider.

The opportunity for a constitutional change is lost at this meeting, as the proposal was withdrawn after Haya voiced her intentions in September. However, a change could be engineered for the Sports Forum scheduled for April.

The sport of endurance has endured a raft of bad headlines in recent months over doping infractions and excessive fracture rates centred on Dubai, Qatar and Bahrain.

There has been discomfort for the princess, too, over bad headlines around the equestrian interests of her husband, Sheikh Mohammed bin Rashid al-Maktoum, who rules Dubai.

The sheikh copped a six-month ban in 2009 when his endurance mount, Tahhan, tested positive for the banned anabolic steroid, stanozolol. A trainer admitted giving the horse drugs before desert races in Bahrain and Dubai.

Has this created a conflict worthy of ending her presidency, as some have suggested?

It would certainly not be the view of the majority of national federations. The fact that all regional group chairs unanimously agreed to support a rule change that would have allowed her a third term is clear enough evidence of that.

In reality, while the headlines have been ugly and undoubtedly uncomfortable for Haya, she has carefully avoided a conflict.

As she put it little more than two weeks ago: “Immediately after my election as FEI president in 2006, I officially acknowledged a potential conflict of interest and delegated authority to the vice-presidents and executive board to deal with any issues related to endurance that might involve a possible conflict.

“I have maintained that approach throughout my entire time in office. All of the people who are authorised to handle issues related to endurance have my full confidence. I know that they will do what they think is right, without regard to my views.”

Haya will be buoyed, too, that yesterday’s two-hour special endurance session revealed international unity and a steely resolve to introduce reforms to get the doping and cheats out of the sport.

So, as the delegates push on through today’s agenda, will member-nations, and particularly groups chairs, express their unequivocal support? Will they, like Sheikh Khalid, go as far as to urge her to reconsider?

Will she be sufficiently moved to respond to delegates on the question?

More likely, she will return home to consider the events of recent days, and respond in due course.

Just what that response will be, we’ll have to wait and see.