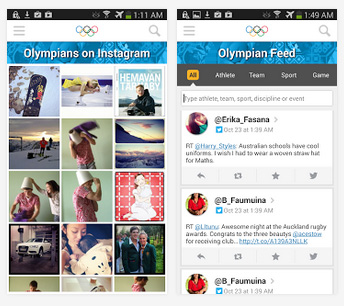 A new app to connect Olympic athletes to their fans has been launched to coincide with 100 days to go until the start of the 2014 Olympic Winter Games in Sochi.

Launched by the International Olympic Committee (IOC), the Olympic Athletes’ Hub app bringing the searchable directory of the social media activities of Olympic athletes to mobile devices for the first time.  A special section will feature the best content published daily by the athletes.

The hub provides aggregates of Olympians’ Facebook and Twitter feeds on one platform, and now also offers the content athletes publish on photo and video sharing site Instagram.  Athletes themselves can now text each other and the IOC directly, and vice versa.

More than 5000 verified Olympians have already joined the Hub.

“The new app and updates unveiled today are the latest example of the IOC’s continued efforts to connect athletes with their fans,” said Claudia Bokel, Olympic silver medalist in fencing and current Chairperson of the IOC Athletes’ Commission.

“The Hub is a great tool for us athletes to interact with the public and even amongst ourselves. The new additions make it even easier for us to communicate in fun, innovative ways.”

The app can be downloaded from the Google Play Store or iTunes App Store.