The Royal Mint has created its first British legal tender coins that honour the Chinese zodiac, with the first in the series marking the forthcoming Year of the Horse.

The coin was designed by British Chinese artist Wuon-Gean Ho. 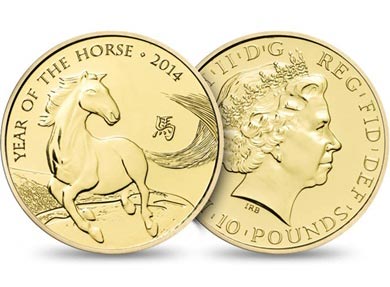 An artist of Chinese descent, who was born in Britain, she works in many disciplines including printmaking, animation, performance and artist’s books.

The coins, gold and silver, range in price up to £1950. The Royal Mint will ultimately produce a series to mark all the Chinese signs of the zodiac.

The horse coins are said to combine elements from both British and Chinese heritage.

In the foreground of the design there is a leaping horse. Beneath its feet lies the famous Uffington Horse, a pre-historic white horse carved into the chalk hills of Oxfordshire.

All the Brilliant Uncirculated and Proof coins are limited editions. Prices range from £82.50 for the Silver One Ounce Proof Coin through to £1950 for the One Ounce Gold Proof Coin.

Wuon-Gean Ho said: “I wanted the design to draw upon my British and Chinese heritage, as my parents are from Malaysia and Singapore and I was raised in the UK.

“Although I am involved in the arts now, studying anatomy and closely observing animals for my degree in Veterinary Medicine was good training for this project.

“The Uffington Horse is part of Britain’s history as well as mine, as I grew up in Oxfordshire close to this famous chalk monument.”