Heaves (also called recurrent airway obstruction) is a severe form of bronchitis/bronchiolitis. The airway passages of a horse with heaves are so obstructed by inflammation, mucus and bronchial muscle contraction (bronchospasm) that the animal has difficulty breathing even at rest.

At the end of each exhalation, the horse pushes so hard with its abdominal muscles that with chronic overuse, these muscles enlarge and form a “heave line” that runs diagonally from the point of the hip forward to the lower edge of the ribs.

Horses with heaves first show signs when they are around eight years old. Signs include coughing and exercise intolerance and are more likely first observed when the affected horse is in closed environments such as a stable. The cough persists, and after one to two years the horse may show difficult breathing at rest. If the condition is untreated and management of the horse is not changed, airway obstruction becomes more severe and breathing becomes progressively more difficult. An affected horse loses weight because it cannot eat sufficient food when gasping for air and because it uses lots of muscular energy in the effort to breathe.

Heaves in horses: a way forward – Dealing with COPD

Heaves is classically a disease of horses that are in dusty environments with poor ventilation. Breathing dust particles that originate primarily in hay can cause airway inflammation. The important role played by the environment in the development of heaves has been known at least since 1640, when green grass was described as the best treatment for heaves in Britain. It was recognized during the 1800s that horses with heaves in New York City stables would become healthy if moved to an environment with clean air.

However, horses kept outdoors also can develop heaves. In the southern United States, a common heaves-like disease known as summer pasture-associated obstructive pulmonary disease appears to be due to inhalation of mold spores originating from pasture soil. Meanwhile, evidence of a genetic susceptibility of horses to chronic airway disease is accumulating. For example, the foal of two affected parents is more likely to develop chronic airway disease than the offspring of unaffected parents.

Veterinarians generally diagnose heaves based on the clinical history of chronic coughing, exercise intolerance and the typical difficult breathing even at rest. Wheezing sounds in the lungs can be heard through a stethoscope or sometimes even by standing close to the horse’s nose. Heaves is differentiated from acute pneumonia by the absence of fever and by lack of increased numbers of inflammatory cells in the blood. An endoscopic examination of the air passages generally reveals accumulations of mucus within the bronchi and trachea. A sample of this mucus will contain numerous mature inflammatory cells known as neutrophils and no pathogenic bacteria.

Radiographs or ultrasound examination provide no additional diagnostic benefit but may be used to rule out other chronic lung diseases such as pulmonary fibrosis, chronic pneumonia and pleuritis, or tumors. Because heaves is thought to have an allergic basis, veterinarians may recommend testing to determine the cause of the allergy. These tests rarely identify the specific cause of the disease. 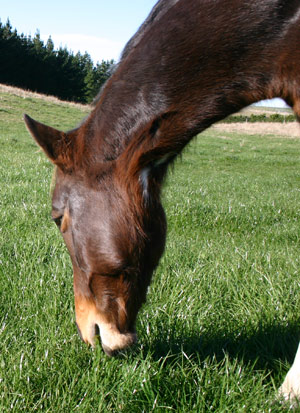 Decreasing the horse’s exposure to dust is essential to treat heaves and prevent progression of the disease. This can be done as follows:

Unfortunately, a horse that is susceptible to heaves cannot be identified early in life. Possibly the advent of the equine genome will allow development of genetic tests that can achieve such a goal. At present, minimizing the horse’s exposure to dust is the best prevention.

Medications and other treatments

The two medications administered to horses with heaves are bronchodilators, which relax the smooth muscle around the air passages and make breathing easier, and corticosteroids, which reduce the severity of the inflammation. Medications can be administered by mouth, by injection or by inhalation.

It is important to realize that no medication cures heaves. Bronchodilators “rescue” a horse that has severe difficulty breathing so it can breathe easier until a better environment or a corticosteroid has reduced the severity of inflammation. Corticosteroids reduce inflammation but if the horse’s environment is not improved, the inflammation will return once corticosteroid administration ceases. Veterinarians are cautious in the use of corticosteroids because of their possible association with laminitis. However, if there is no concurrent problem such as Cushing’s disease, it is unusual for laminitis to develop during the treatment of heaves.

In people, allergic respiratory diseases such as hay fever are treated by desensitization, which involves multiple injections of small amounts of allergens into the skin over several months. Similar treatments have been used for heaves, but there have been no controlled trials to demonstrate their usefulness.

Numerous over-the-counter medications are used to treat heaves, but there are no data on their efficacy. It is always easy to convince oneself that these medications are beneficial because the severity of heaves comes and goes as the amount of dust in the stable or the pasture varies.

Once a horse has had heaves, it will always be susceptible to developing the symptoms. Heaves must be managed through decreasing exposure to dusts known to make the horse’s disease worse. However, the longer the horse remains in clinical remission, the less likely it will develop another severe bout. It is not yet known if changes in the horse’s air passages that are consequences of inflammation can ever be truly reversed even with environmental management or long-term treatment with corticosteroids.

4 thoughts on “All about heaves in horses”