Your foal has arrived … is it OK? 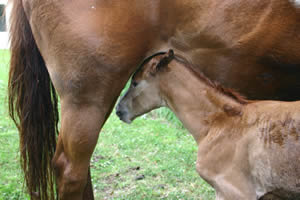 You have been “patiently” awaiting the arrival of your new foal for 11 long months. You’ve given your mare the best possible care and while you expect a normal, healthy baby; as will occur in the vast majority of cases.

If you are like most of us you will wonder, “Is everything OK”?, says Robert N. Oglesby, DVM.

Standing and nursing within two hours are still the best signs of a healthy foal. Usual physical exam parameters like temperature, pulse and respiration are so variable in a newborn foal as to be almost useless for diagnosis. That does not mean a physical exam is not important. Recording these parameters and then watching them to see that they move toward more normal numbers for young foals can be an early clue of problems. The foal also needs to be checked for congenital problems that may cause problems later. 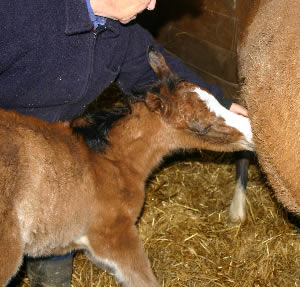 The first step in evaluating a foal’s condition is knowing what is normal:

Following is a list of situations that may indicate trouble brewing: 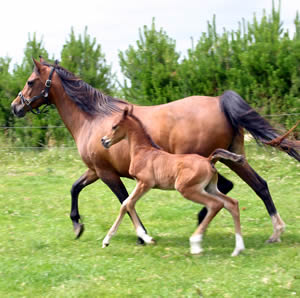 Carefully monitor the newborn over the first days; even those foals appearing normal and healthy at birth can develop problems later on.

Care of the healthy newborn foal

It is standard that the navel be dipped in betadine solution several times daily over the first couple of days. Studies show no decrease in navel infections when this is not done. A recent study showed 0.5 % chlorhexidine [1 part Nolvasan™  in 3 parts water] is the dip of choice for navels. Strong iodine is avoided due to its caustic properties.

Single antibiotic injections for the foal at birth are of no use in preventing infections and in my mind are contraindicated as they help create a resistant population of bacteria. A chance of an unexpected reaction to the antibiotic is always possible, too. 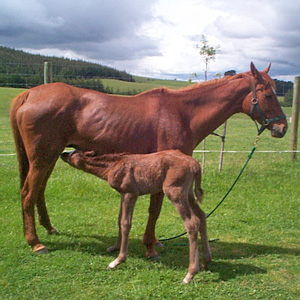 An important test to be sure your foal is well protected against disease is an IgG test. This test will make sure the foal received adequate antibodies from the mare’s milk. An IgG test on the foal 16 hours after he first nursed would seem prudent.

IgG is shorthand for the type of immunoglobulin the foal receives from the mares colostrum. An immunoglobulin is a protein that is produced by the cells of the immune system that circulates in the blood and provides defence against infectious diseases and toxins. So, if everything goes well, the mare secretes her own IgG into the colostrum or first milk to the foal.

IgG is a rather large protein molecule that would normally be digested in the stomach and small bowel and therefore lose its ability to fight infections. However for about the first 12 hours after birth, the bowel is receptive to these large protein molecules and will absorb their intact. This process of production, secretion, ingestion, and absorption, is called passive transfer.

Some problems that may prevent passive transfer are:

So you can see there are all types of reason for failure. There are a number of ways to check to see if the process is working. 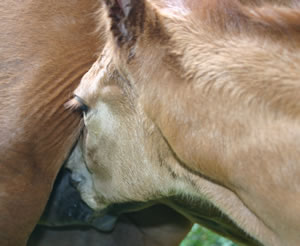 The colostrum can be checked for immunoglobulin content by checking its specific gravity with a hydrometer. Specific gravities greater than 10.60 are considered good and tend to be sticky between the fingers.

A better way to check for adequate passive transfer is by running a check on the foal’s blood at 16 hours after the foal has first nursed. There are very accurate, easy to read tests for this that the vet can run on the serum.

The problem is interpretation of the results. We know the foal with less than 200 mg/dl IgG in its blood is going to have problems. In the past 400 mg/dl has been considered the low end of acceptable. However in the 200 to 400 range a lot of controversy appears. It is best to consider the IgG level in light of the total picture. The 200 to 400 range might be OK if the foal and mare are healthy and the environment optimal. On the other hand levels below 800 (yes 800!) is not acceptable in the foal who is already sick. The foal uses up and breaks down the mare IgG. We know infection rapidly diminishes the IgG levels.

Should every foal be checked? Remember, once a foal develops a systemic infection they are very difficult and expensive to treat. These tend to be mixed, resistant, toxin producing, gram negative blood infections. On the other hand a mare and foal with a picture-perfect foaling and no indication of problems is unlikely to have problems. If the problem is caught in the first 24 hours before infection develops it can be prevented with a simple transfusion.

You must decide if spending the extra $50 to $100 for the test is worthwhile. I usually put it to the clients this way, “if you would spend $500 to $1000 on treating a sick foal with a guarded to fair prognosis, do the test”. Of course whenever there are risk factors present, I always strongly recommend the test as long as the cost of the transfusion, if the test shows problems, is not prohibitive. 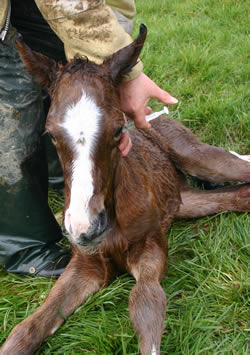 Vaccinating the newborn foal is controversial, too. The foal gets all his initial resistance to disease from the mare’s first milk. His immune system is competent, it just hasn’t decided what is bad for the foal yet.

Vaccinations may tie up some of the mare’s antibodies and actually make the foal more susceptible to infection. We know this does not happen with the tetanus vaccination, so it is safe at this time. Other vaccines are still not known. Usually the foal is well protected for the first three months. Best for the foal is to be sure the mare is vaccinated one month before birth, then the foal get his first vaccines at three months of age.

Another standard treatment is an enema for the foal. Standard Fleet enemas [saline laxative] that are available at the drug store are used. It is true that most foals strain somewhat to pass their meconium for the first day, but few actually require treatment.

The mare needs to be checked for traumatic complications to the reproductive tract, adequate colostrum production, and complete passage of the placenta. Crampiness following birth is normal but if the mare’s colicky behavior is severe or worsens over time complications like a torn uterus or uterine artery rupture should be investigated.

The mare will be anxious after the foal is born and free choice good quality hay will go a long way towards relaxing her. She will now need extra protein and calcium in her diet, so alfalfa hay is a good choice, but make feed changes slowly.

The placenta should pass within a couple of hours of birth and if not by 8 hours she will need immediate treatment. If the mare’s worming program is less than optimal, a deworming with ivermectin should be done now.

A final word of advice

The most common killer of neonatal foals is infection. A foal can go from healthy to critically ill in less than a day. If you suspect something is wrong with your foal, now is the time to act. If you wait until he is very ill his chances of survival become poor. Good mare care and a clean, dry environment are your best protection against problems.

This article reprinted with permission from Horseadvice.com, an internet information resource for the equestrian and horse industry since 1994. It has tens of thousands of documents on the web about horse care, diseases, and training.

First published on Horsetalk.co.nz in 2005.

One thought on “Care of the newborn foal and mare”