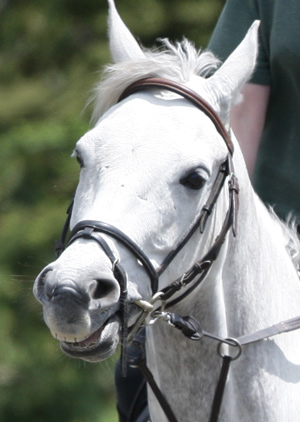 Researchers from Ireland and Australia have completed preliminary development of two methods of measuring noseband pressure, which could impact on the welfare of the ridden horse.

Some riders believe a tight noseband enhances bit pressure, allowing rein aids to be more effective. This goes against the standard recommendation for adjustment of the noseband, where the space between the noseband and the nasal midline should easily allow the insertion of two fingers, allowing the horse normal jaw movement.

Orla Doherty, of the University of Limerick in Ireland, and her research team investigated the level of noseband tightness being used at equestrian competitions.

The researchers studied 850 show jumpers, and found only 20 percent were fitted with a simple cavesson noseband; the majority used flash or grackle nosebands.

“We are also interested in how tight these nosebands are being fastened,” said Doherty, who presented the findings of her team’s research at the recent International Society for Equitation Science annual conference in Delaware, in the United States.

“A horse experiencing pain while being ridden is more likely to display flight and fear responses, such as head tossing, bolting etc,” Doherty said.

The researchers developed two approaches to estimate noseband pressures on horses – one measuring dynamic tension in the noseband and inferring pressures based on the anatomical curvature of the horse’s nose; the other using pressure sensors deployed at specific noseband-tissue contact points.

In the first of two studies, an Irish cob was fitted with the bridle and noseband, where a “two-finger” tightness was established using the noseband taper gauge  promoted by the ISES.

Information was collected while the horse wore the noseband, and was fed both hay and hard feed. Results showed rhythmic peaking of pressures while the horse chewed, and when the animal was given the cue to back up.

The physiological impact of high pressures – either sustained or pulsed – on animal tissue is as yet unknown; however, in humans, high pressures are known to cause tissue and nerve damage.

Doherty said more data need to be collected to validate the measurement technique and demonstrate a correlation between anomalously high pressures and animal behaviour and welfare outcomes.

Researchers would like to establish objective metrics that could guide best practice.

“We really don’t know what happens to soft tissues when we tighten the noseband,” Doherty said.

“If the horse physically can’t open its mouth, then are the fluctuations in pressure or force going to be greater or less or displaced to the bit-oral cavity interface? Much remains to be done to answer these questions.”