British researchers have been surprised by the commonest causes of lameness unearthed in a study of 294 ceremonial horses.

The researchers thought arthritis would easily be the most common cause of lameness among horses in the study group, but instead found it was cellulitis – a bacterial infection of the connective tissue of the skin.

They suggest the daily physical activities of the study horses, all from the British Army’s Household Cavalry Mounted Regiment (HCMR), would more closely mimic those of typical pleasure horses than the competition horses and racehorses that are so often used in research into lameness.

Third-year student Jessica Putnam, from the School of Veterinary Medicine and Science at The University of Nottingham, spent 13 months documenting incidents of lameness among the 294 horses in the regiment.

Her research, carried out in collaboration with Captain Laura Holmes, the regimental veterinary officer, has just been published in the Equine Veterinary Journal.

Her supervisor, Dr Sarah Freeman, an expert in veterinary surgery at the veterinary school, said: “These ceremonial horses reveal a lot about what horses in yards around the world have to contend with.

“The main message from this study is that horses in work often have minor and short-lived problems.

“Current literature is focused on the more major and poor prognosis conditions, which is understandable because they have the big impact, but we should recognise that they aren’t necessarily the most common, and we should not ignore the common minor conditions.”

The horses of the Household Cavalry Mounted Regiment are a familiar sight on the streets of London, having the unique privilege of carrying out ceremonial duties on state and royal occasions. 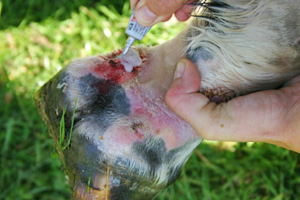 In the last two years they have been particularly busy, participating in celebrations for the royal wedding, the Queen’s birthday and the Queen’s jubilee.

Putnam, who has now graduated and is working in equine general practice at Aldington Equine Vets in Lancashire, gathered information through questionnaires completed by Holmes and the farriers and riders who help care for the cavalry horses.

As well as the type of lameness, information was collected on the length of time the horse was out of work and the eventual outcome.

Freeman said: “Lameness is a common problem in the horse, but in many cases no-one thinks it is significant enough to report.

“As a result, information on the incidence of lameness in horses in the UK is restricted to studies of performance horses, racehorses or referral hospital populations.

“Although the horses of the Household Cavalry Mounted Regiment have a highly specialised ceremonial role, their activities parallel to a surprising degree those of pleasure horses.

“They represent a very different population to most of the current published research — which is predominantly racehorses and competition horses — but to date we have no information on this part of the population.”

Putnam’s research revealed that the incidence of lameness among the horses was low, with a monthly rate of slightly more than 2 percent.

But what surprised and particularly interested the team was that the most common cause of lameness was cellulitis.

Freeman said: “We thought arthritis would easily be the most common cause of lameness but early on in the study one of the staff told Jessica that wounds and cellulitis were more of a problem as they were unexpected and put the horses off work.

“There were a total of 16 cases of cellulitis reported in the study, most attributed to small cuts and each putting the horse out of work for an average of 17 and a half days.

“Skin wounds were the second most common cause of lameness, accounting for 14 incidents and leading to an average of just over 25 missed working days.”

After talking to horse owners on the yard at the veterinary school, where students kept their own horses, the research team discovered that a similar percentage of horses had to be taken out of work through minor nicks or swellings.

Foot and shoeing problems were the third most common cause of lameness in the study group, followed by tendon/ligament injury, arthritis, foot abscesses, and muscle bruising.

2 thoughts on “Skin maladies the commonest cause of lameness – research”