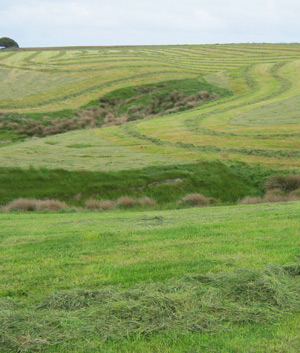 Authorities in Ireland have extended an imported fodder scheme for a week to help farmers hit by feed shortages sparked by the nation’s most severe winter in over 50 years.

Agriculture Minister Simon Coveney confirmed last Wednesday that he had extended the Imported Fodder Transport Scheme for a week. It will now run until Friday, May 10.

Horse Sport Ireland encouraged struggling horse owners to take advantage of the scheme and other initiatives to help farmers through the difficult period.

“The weather has improved somewhat, but grass growing conditions are still below normal and there are farmers in parts of the country who are still finding it difficult to locate enough forage for their animals,” Coveney said.

“Having reviewed the situation, I have decided that extending the imported fodder transport scheme for one week is appropriate.”

The minister also confirmed that maize silage is eligible under the scheme.

He said his department has been working with the industry on this and said that large quantities of maize silage, up to 6000 tons, are currently being sourced for early delivery to the country.

Coveney paid tribute to the farmers and farm organisations that have gone to what he described as great efforts to help their fellow farmers in need of fodder.

“Since the scheme was announced just one week ago, over 300 loads of fodder have been imported and distributed to farmers to keep them going. At this point, over 3500 tons of hay has been imported into the country with significant volumes due in over the coming days.

“I am satisfied that this volume of imports is making a real difference on farms and assisting farmers through the shortage. The extension of the scheme of a further week will build on this and ensure that further supplies are imported with the benefit of the transport subsidy.”

Coveney said banks had been asked to take a flexible approach towards extending credit to farmer customers at this difficult time.

He said the department’s veterinary inspectors continued to provide emergency assistance under the department’s early warning system to farmers whose animals were currently experiencing serious welfare issues and where the farmer was unable to cope with the situation.

Coveney repeated his assertion of last week: “No animal should die of starvation in this country and help is available to those farmers who cannot cope.”

Horse Sport Ireland chairman Professor Pat Wall welcomed the extension of the scheme and reminded horse owners who were in serious difficulties as a result of fodder shortages to contact the Department of Agriculture’s low-call emergency helpline number 1850 211990.

“While there has not been a focus on horses in the coverage of this crisis, there are horse owners out there who are struggling to feed their animals and the schemes and initiatives undertaken by the minister are open to them as much as they are to cattle, dairy and sheep farmers.

“Horses are something that bind people together and gives them a common interest and it is very important that all communities stay active at a time like this.

“This crisis will pass and things should be back on an even keel in the weeks ahead, but in the meantime anyone who has a horse should not be afraid to seek help if they have a serious shortage of fodder,” he said.