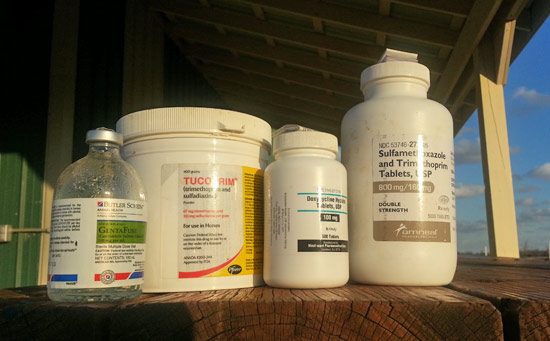 Antibiotic resistance is rapidly becoming an issue in the equine world, a new white paper has warned.

It warns that tighter controls could be imposed on medicines in a bid to prevent antibiotic resistance. Such controls could ultimately mean certain antibiotics would no longer be available for use in horses.

To slow the development and spread of multi-drug resistant bacteria, it is imperative that all parties involved practice the careful use of antibiotics, according to the paper produced by the American Association of Equine Practitioners’ Equine Research Coordination Group.

The group, comprised of organizations and researchers that support equine research, is chaired by New Zealand-born equine orthopedic specialist Dr Wayne McIlwraith, who is based at Colorado State University.

Antimicrobial resistance is a type of drug resistance whereby bacteria are able to survive exposure to an antibiotic.

It is inherent to the use of antimicrobials, according to Dr Harold McKenzie III, who is associate professor of medicine at Virginia Tech’s Marion duPont Scott Equine Medical Center.

“Any time antimicrobials are used, there is an inherent selection process whereby the bacteria exposed to the antibiotic will be inhibited or die, but a few bacteria will likely survive,” he said.

“Ultimately, if this process continues, only resistant bacteria remain.”

Due to the frequent use of antimicrobials in humans and animals some bacteria are becoming resistant to many antibiotics, a situation known as multi-drug resistance (MDR).

The paper explains that resistant bacteria have the ability to change their structure or function so an antibiotic is unable to do what it is designed to do: weaken or kill bacteria to encourage the immune system to destroy them.

Just like in people, methicillin-resistant Staphylococcus aureus (MRSA), multidrug-resistant Pseudomonas, and other bacteria are real threats to animals that have developed bacterial infections that are antibiotic resistant.

Antibiotic resistance in horses is exacerbated by a few different practices, one of which is the use of antibiotics by horse owners and trainers without veterinary supervision or a prescription.

Dr Gary Magdesian, professor of medicine and critical care at University of Califorina Davis School of Veterinary Medicine, finds trimethoprim/sulfamethoxazole (TMP-SMZ) and procaine penicillin G commonly used without a prescription by owners wishing to medicate their horses before calling a veterinarian.

This, he said, can be detrimental to antibiotic efficiency if the wrong antibiotic, inappropriate dose or duration of treatment is used, and all these choices could encourage antibiotic resistance.

If a horse becomes ill enough that the owner feels antibiotics are warranted, it is imperative to consult a veterinarian for guidance, the paper advises.

“Just because a horse has nasal discharge or a fever does not indicate that medical intervention is needed. Many times these signs are indicative of a viral infection, for which antibiotics have no effect,” the researchers said.

Taking precautions to prevent infections in horses can eliminate much of the need for antibiotics in the first place.

“Biosecurity is key and a very proactive approach to preventing disease, minimizing antimicrobial use and minimizing development of antibiotic resistance,” says Magdesian. 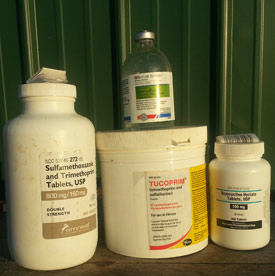 All traditional biosecurity measures should be taken to lessen the chance of horses becoming colonized or infected with antibiotic-resistant bacteria such as MRSA. Such measures include segregating resident horses from horses that travel, avoiding the touching of horses without proper hand washing at horse events, and the disinfection of barn-tools and implements after use on sick horses or after returning home from events.

McKenzie adds: “Any efforts that we [veterinarians] can take to reduce our need to prescribe antibiotics will help us to preserve them for cases where they are needed.”

The researchers point out that, because veterinarians are intensively trained in clinical pharmacology and infectious disease, including the mechanism, efficacy, dosage regimens, drug interactions, and side-effects of medications, they are able to select the most appropriate antibiotic regimen for individual horses.

“When the bacterium responsible for the infection is identified from culture results, or if its presence can be predicted from clinical signs, a narrow-spectrum antibiotic is prescribed, meaning it targets very specific bacteria.

“When a bacterium which causes a disease in a horse has not been identified or when a specific bacterium cannot be reliably predicted, a broad-spectrum antibiotic or combination of antibiotics is administered meaning that it targets a wide array of different bacteria. These broad-spectrum antibiotics, such as TMP-SMZ, are most common in barn tack-rooms and, unfortunately, are traditionally administered without veterinarian supervision.”

Although the US Food and Drug Administration (FDA) is already deeply involved in the regulation of antibiotics for animals, even stricter regulation is a very real threat to horse owners, the paper suggests.

While it is hoped that the FDA will not limit the antibiotics available for equine veterinary use, says Magdesian, additional education is needed to ensure that appropriate “extra label” guidelines are being followed.

Tighter FDA regulation in an attempt to prevent antibiotic resistance could mean that certain antibiotics would no longer be available for use in horses or that they might not be prescribed for any use other than what is on the label. Such limitations would seriously hamper veterinarians’ ability to treat many diseases.

Therefore, says McKenzie, the risk that an animal could become sicker or even die if the drug needed is not available becomes the same risk as allowing unregulated use with available drugs which cease to be effective due to drug resistance.

Why more research is needed

While there were 29 new drug classes introduced to society between 1929 and 1969, there have been relatively few new antimicrobial drug discoveries for use in horses since then, with only minocycline and additional macrolides and cephalosporins for use in foals on the horizon.

The prospect of having limited new antibiotic choices is made more alarming by the potential for antibiotic resistance, the paper said.

Magdesian feels it is imperative that veterinary and human medicine work together to promote the judicious use of antibiotics in order to prevent the development of antibiotic resistance and the loss of many of the drugs effective in treating diseases in both humans and animals.

With effective antibiotic choices dwindling, veterinarians in the future might struggle with ways to treat even routine injuries and issues, making the study of antibiotic resistance – and the possible formation of additional antibiotics – at research universities and funding agencies a necessity, the paper concluded.

The white paper can be read at