A volunteer policeman knows he has plenty of donkey work to do, but is hoping to put in a record-breaking performance in a giant donkey costume. 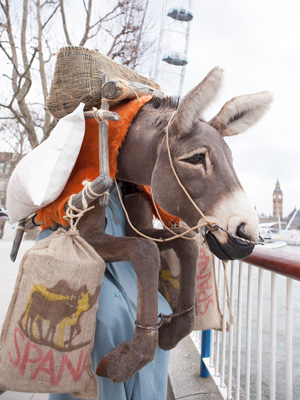 Special constable Nic Van Gelder intends to make an ass of himself in the London Marathon, but it is all in the aid of charity.

The 35-year-old will swap his uniform for a giant donkey costume to run the race. It will be no easy feat, as the costume weighs over two-and-a-half stone (17kg).

The special constable for Haringey will be raising money for the international working animal charity, the Society for the Protection of Animals Abroad (SPANA).

Van Gelder, part of the SPANA fundraising team, is hoping to break the charity’s current London Marathon donkey-costume record of 7 hours and 47 minutes.

“I know I won’t be able to do much more than a walking pace in the heavy costume and so it’s going to be a real endurance challenge,” Van Gelder said.

“People think I’m crazy to be doing the marathon with a two-and-a-half-stone costume weighing down on me, but it’s nothing compared to what some working animals in developing countries are forced to carry for miles every single day of their lives.

“I want to raise money and awareness for SPANA, as it does such an important job providing free vet care for working animals that otherwise might never receive any.”