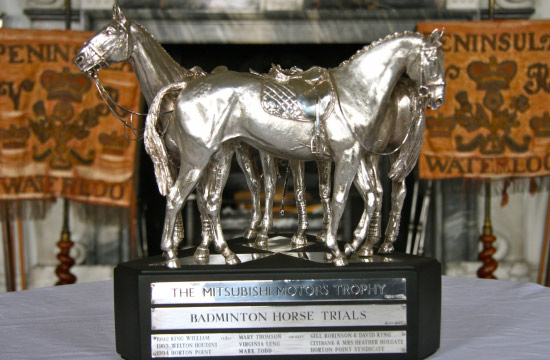 Specialist equestrian channel Horse & Country TV is going all out this year in its coverage of the Mitsubishi Motors Badminton Horse Trials.

Coverage will include preview and highlights shows, as well as exclusive behind-the-scenes content from Badminton through Rudall’s Round-Up and the all-new Badminton: A Rider’s View.

On April 29, the channel’s special Badminton Preview program will focus on three of the world’s greatest event riders: Michael Jung (GER), William Fox-Pitt (GBR), and Andrew Nicholson (NZL). Jung is the reigning Olympic, World and European champion. This year will be Jung’s first appearance at Badminton. Fox-Pitt has five horses to choose from in his attempt to claim the Rolex Grand Slam of Eventing, by adding the 2013 Badminton title to his wins at the 2011 Burghley Horse Trials and the 2012 Kentucky Three-Day Event. Andrew Nicholson, the man with by far the most Badminton completions to his name, but without a win, was on a roll at the end of 2012 with victories at the HSBC FEI Classics at Burghley and Pau.

At the event itself the Horse & Country TV team will be present throughout, filming a Rudall’s Round-Up special to be premiered on May 13. Presenter Jenny Rudall will be taking the audience behind the scenes and interviewing the riders and personalities who help make Badminton such a landmark in the equestrian calendar.

On May 16 Horse & Country TV (Sky Channel 280) will premiere a one-hour Badminton Highlights show featuring key action from this year’s competition. Produced for the FEI, the programme will feature extensive cross-country footage as well as the final rounds of the show jumping.

Perhaps the most exciting new aspect of Horse & Country TV’s Badminton coverage this year will be a specially commissioned one-hour documentary – Badminton: A Rider’s View. In the run up to, and throughout the whole competition, Jenny Rudall will follow top eventer Francis Whittington, visiting his yard to observe and document his training regime first-hand, including a lesson with World Class Performance Manager, Yogi Breisner.

The program will give unique insight into what it takes to get horse and rider to peak condition and ready to compete at the highest level.

“It reflects the combination of top quality sports action and behind the scenes insight and access that our viewers love. We’re delighted to have Saracen’s support in the making of Badminton: A Rider’s View which will be a unique window into the world of top class eventing,” he said.