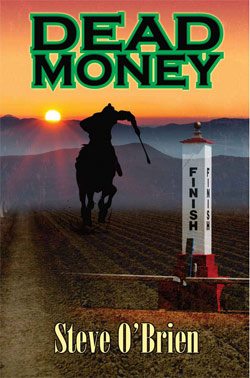 There’s no shortage of fact or fiction on the uber-glamorous world of horse racing: of course that’s the side that the marketing folks want the world to see.

Main players aside – horses, trainers, owners and jockeys aside – behind the glamour there is a dark side constantly pulsing through the thoroughbred business – invariably centered on gambling.

Either you know the ropes or you don’t: trifectas, daily doubles, quaddies – whichever country you are in there are many ways for the industry to part punters from their money.

But sometimes the punters get their own back – legally or otherwise – and in Dead Money, Steve O’Brien shows just how cunning and ruthless a gambler on the trail of a wad of notes can be when he’s planned a lucrative, long con.

The ‘long con’ in Dead Money will seem rather convaluted to impatient and small-time bettors (like me), and to see a horse paying more to run second or third than it does to win just doesn’t seem possible. O’Brien assures readers that thanks to commingled betting, this scenario has happened before, even as recently as May, 2012.

Steve O’Brien is the author of Elijah’s Coin, Bullet Work and Redemption Day. Elijah’s Coin has been added to the reading curriculum in multiple secondary schools throughout the US and has been incorporated in a university ethics course. The e-book version of Redemption Day was an Amazon.com Bestseller.
O’Brien is a graduate of the University of Nebraska and George Washington University Law School. he lives in Washington, DC.