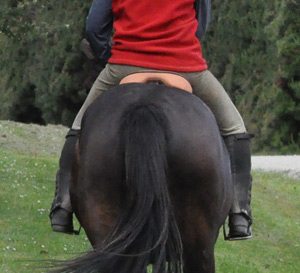 British research suggests only one in 20 riders may be within what they describe as the optimum weight range for their horse.

The study found that a third of recreational riders were too big for their horse, leaving the animals at risk of back troubles and lameness.

Roughly two-thirds of riders in the survey fell within the satisfactory range for body weight when assessed against their mount.

The findings have been published in the latest issue of the Journal of Veterinary Behaviour.

The researchers from Duchy College, in Cornwall, tracked a group of horses and their adult riders from stables across Devon and Cornwall.

An industry practitioner proposed a 10 per cent rider-to-horse ratio for optimum performance, up to 15 per cent as satisfactory and a level of 20 per cent to be a welfare issue.

Just 5 per cent of the riders involved in the study met the optimum threshold.

The remaining 63 per cent were 10 to 15 per cent of the weight of their horse.

»  Working out the weight of your horse

She said the health impact on the horse from riders who were too heavy could become quite extreme, quite quickly.

Behavioural problems such as bucking and rearing could result.

Randle said the guidelines for riding weights were not widely known by those in the horse industry.

The weight guidelines, she added, did not take account of all factors, such as the age and breed of the horse, the kind of riding to be undertaken, or the experience of the rider.

While riding schools had rules in place over the weight of riders, it was often private owners who were harming their own horses, she said.

The study, the aim of which was to assist in the identification of rider to horse body-weight ratios to optimise ridden performance and welfare, involved assessment of 50 horse-rider combinations. All riders were 18 years old or more.

“Since observed rider-to-horse body-weight ratios varied between 14.2 and 16.6 per cent, the suggested 10 per cent guideline appears unrealistic within the general riding population,” the authors noted.

They said they hoped their findings would go some way toward allowing the development of a scientifically based guideline allowing informed decisions to be made on horse-rider suitability.

There were currently no industry-wide guidelines for the suitability of rider weight to horse size, they noted.

“Simple measures of rider weight can be used effectively to develop sensible rules upon which decisions about rider suitability for a particular horse can be made,” they said.

77 thoughts on “Many riders too heavy for their mounts – study”