Superstar racemare Black Caviar galloped to an easy victory in the William Reid Stakes at Moonee Valley in Victoria last night, for her 14th Group One victory and 24th consecutive race win.

Trained by Peter Moody and ridden by Luke Nolen, Nelly finished four lengths ahead of Karuta Queen with Fawkner a half length away in third.

A massive crowd of more than 25,000 were on course to watch the win.

Moody said Black Caviar’s bext start could be the Gr 1 T.J. Smith Stakes (1200 m) at Randwick on April 13. She won the race two years ago. Her owners have also talked about taking the mare back to Royal Ascot in Britain.

• A new rose has been named after Nelly.

Knight’s Roses has announced the release of the new Black Caviar Rose, which features a vanilla and jasmine fragrance.

The multi-award winning Black Caviar Rose will officially be released later this year. Black Caviar’s owners will use royalties to raise awareness and funds for an extremely good cause, which will be announced in Spring. 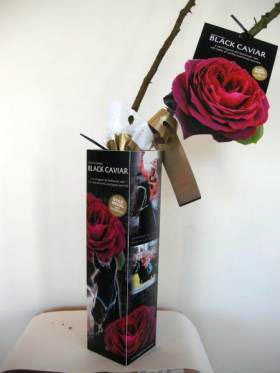