Breeding stallions could potentially be kept together in large pastures, a Swiss study has shown.

The researchers found that the frequency of fighting-related behaviours decreased quickly among the stallions in their study when they were pastured together and was at a minimal level from the fourth day.

They suggested that pasturing stallions together had the potential to increase horse welfare and reduce labour associated with horse management.

The findings of the peer-reviewed study have been published in the open-access journal, PLoS ONE.

Researchers Sabrina Briefer Freymond, Elodie Briefer, Rudolf Von Niederhäusern and Iris Bachmann based their findings on the study of breeding stallions owned by the Swiss National Stud, in Avenches, that were housed in groups on a large pasture.

Five stallions were kept under such circumstances in 2009 and eight stallions in 2010.

“This is especially true for expensive horses used for racing and other competitions, because of the potential risks of aggressive interactions such as kicks or bites that could occur when horses are housed together.

“However, individual housing systems can have several disadvantages for horse welfare, and particularly for their mental health, when they are not designed properly.”

Successfully keeping domestic stallions in outdoor groups would mimic bachelor bands that are found in the wild, they said.

“Unfortunately, the high level of aggression that unfamiliar stallions display when they first encounter each other discourages owners from keeping them in groups.

“However, this level of aggression is likely to be particularly important only during group integration, when the dominance hierarchy is being established, whereas relatively low aggression rates have been observed among stable feral bachelor bands.”

The researchers set about observing the two herds at the centre of the study, studying the pattern of fighting-related behaviours, ritual behaviours and the way the order of dominace was established.

They found that the stallions displayed more ritualistic behaviours that agonistic [fighting-related] behaviours.

“The frequency of agonistic and ritual interactions decreased quickly within the first three to four days.”

The frequency of interactions affecting the order of dominance, which they referred to as affiliative interactions, increased slowly with time before decreasing after 9–14 days.

“A stable hierarchy could be measured after two to three months,” they reported.

“The highest-ranking males had less ritual interactions than the lowest-ranking.

“Males had also less agonistic, ritual and affiliative interactions if they had already been housed in a group the previous year.

“Therefore, we found that breeding stallions could be housed together on a large pasture, because the frequency of agonistic interactions decreased quickly and remained at a minimal level from the fourth day following group integration.”

However, they stressed that more studies were needed to fully evaluate housing them together, in order to determine aggression levels associated with integrating the animals.

They saw two main benefits in housing stallions in outdoor groups, if enough space was available. 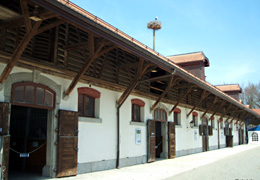 “First, it could increase horse welfare by allowing them to fully express their natural behaviours including social interactions and locomotion.

“Second, it could potentially reduce labour required for housing, cleaning and exercising horses.

“The main reason that prevents owners to keep horses in groups is the potential risk of physical aggression. “Several studies have shown that stallions can be kept in stable groups, with few injuries linked to aggressive interactions.

“However, physical aggression rates are likely to be particularly high during group integration, when stallions are interacting for the first time and when the dominance hierarchy is being established.

“Because agonistic encounters and rituals play a role in establishing dominance relationships within a group, we expect their rate and intensity to decrease with time, although not disappear completely, in a stable bachelor group.

“More studies are needed to fully evaluate if stallions can be housed in groups, in order to determine aggression levels associated with group integration.”

The researchers noted that, in the wild, stallions were harem breeders that defend a group of females instead of a particular territory.

“When they do not have a harem, most stallions form associations known as bachelor bands. These bands contain two to 15 individuals, and are relatively stable over time, although less stable than harem bands.

“They are composed of yearling or young stallions that have not yet acquired a harem, and are in an intermediate state of development between sexual and social maturity.

“Bachelor bands can also include older stallions that have lost their harem.

“Agonistic and ritualized behaviours like fights, threats, avoidance and submissive behaviours occur among bachelor bands. These aggressive interactions could play an important role in improving skills and physical stamina necessary for stallions to acquire and maintain a harem.

“However, as in many other species, when they interact, stallions typically display the minimum amount of aggression required by the situation. 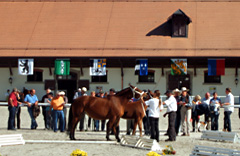 Four of the stallions in the study were were included in both the 2009 and 2010 groups monitored by the researchers.

The stallions were 8 to 19 years old and had been kept at the Swiss National Stud for 5 to 16 years. They were used for breeding and for driving.

They had all, but one, been regularly hitched next to each other for driving.

Before the study, they had been housed on several occasions in adjacent stables, but they had never been in a group.

Therefore, all the stallions used in this study were familiar with each other, but had no experience of group housing.