A moonwalking Shetland pony is the star of a new British commercial promoting the sharing of silly material on the internet. 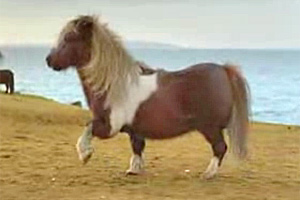 The 60-second commercial is shot against the dramatic backdrop of the Shetland Islands and follows the story of a stocky little pony with a penchant for moonwalking, which he accomplishes to the sound of “Everywhere” by Fleetwood Mac.

The advertisement, by the London-based creative communications agency Wieden + Kennedy, seems certain to go viral, and viewers are invited to the website, Ponymixer.com, to employ a little more digital trickery to enable the little pony to add a few more funky moves.

The ad agency, in explaining the concept behind the ad, said it was sharing this silly stuff with each other on a daily basis that connected people.

“Wieden + Kennedy has embraced this trend in our latest work for our clients, mobile network Three. Because when it comes to silly stuff, they know it matters.

“But rather than just play back the crazy things online that we all like to share, we wanted actually to contribute to it. We wanted to celebrate the seemingly silly stuff and also provide the means for people to mess with it and create their own little pieces of joy that they can share.”

The Pony Mixer, it said, was a dancing-pony-remixing tool where users can make the pony shake it to anything from Boyband to Bollywood.

The campaign, which aims to get people to share their funny clips or photographs digitally, carries the strapline, “Silly stuff. It matters”.

Mobile network Three was one of the successful bidders for the high speed 4G mobile spectrum, paying £225m for its coverage, meaning the bandwidth is sure to be there to share material.