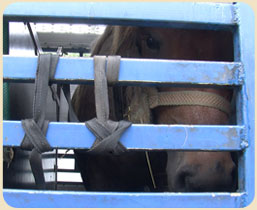 International charity World Horse Welfare has painted a grim picture of the horse-meat trade, as the scandal of contaminated beef products spreads across Europe.

Horse meat found in beef products was the product of suffering, and evidence pointed to the trade’s role in the spread of disease, the charity said.

World Horse Welfare said it was concerned about the casual attitude of some commentators towards eating horse meat while the abuse of horses that was rife in the trade went largely unreported.

“This is no laughing matter. The whole European trade is mired in inadequate laws, needless suffering and the elephant in the room is the spread of infectious equine disease.”

The charity did not oppose humane slaughter or the eating of humanely produced horse meat, which is a personal choice, but it has been campaigning to stop the needless long distance transportation of 65,000 horses a year across Europe to slaughter.

As part of its evidence-backed campaign, the charity undertakes regular field investigations documenting the abuses of the horse slaughter trade.

Most live horses destined for slaughter were currently sourced from eastern Europe and more recently Spain, and the leading importer of live horses for slaughter is Italy, with France and Belgium importing smaller numbers.

“In the recent horse burger scandal for instance, we know from experience that meat originating in Poland could have been from horses bred for slaughter and fattened to the point of obesity,” Owers said.

“Or the meat could have come from working horses, young horses or unwanted horses outside of the country, who in all likelihood could have been travelled for days on end over thousands of miles with little food, water or rest, enduring terrible conditions, pain, injury, dehydration and disease.”

“While there is not yet a proven link between the continental horse slaughter trade and Britain’s first cases of Equine Infectious Anaemia for 30 years in 2010 and again in 2012, there is no doubt that the spread of disease in Europe is a real issue for horse welfare and an issue for Britain,” Owers said.

Equine Infectious Anaemia is prevalent in Europe, and endemic in parts of Eastern Europe. It is a notifiable disease that requires the destruction of horses carrying it. There are also far more dangerous diseases such as African Horse Sickness which spread in the same way and could get a foothold in Europe, and so threaten Britain’s £7 billion equine industry.

The suffering of these horses would have been exacerbated if they were obese. “Long journeys are difficult to endure for even the most fit and athletic horses, but for obese and unfit animals, the vast majority of which will have never been transported for any significant distance before in their lives, this travel is an absolute nightmare,” said Owers.

Inadequate space in the compartments of slaughter lorries also causes grave injuries to horses transported in them.

“We see appalling rubbing and cutting injuries arise from this trade because horses can be crammed into inadequate space in poorly-designed vehicles.”

World Horse Welfare is calling for a short, maximum journey limit of 9 to 12 hours to prevent horses from having to travel for days on end to slaughterhouses. This limit is based on scientific evidence that shows horses suffer on longer journeys, and is also recommended by the European Commission’s own scientific advisers, the European Food Safety Authority.

The charity is also calling for increased space allowance for horses and better vehicle design and welfare standards.

“Make no mistake – the long-distance transportation of horses for slaughter is the biggest abuse of horses in Europe, spreads disease and it needs to be stopped,” Owers said.

“The European Commission must introduce better transport laws that protect horses, consumers and the equine industries of Europe.”