The commercial produced by American beer-maker Budweiser, showing the bond between a man and the horse he trained, is proving to be a runaway hit. 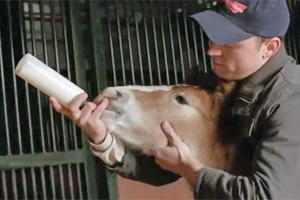 The advertisement, entitled Brotherhood, has taken on a life of its own since airing at the Super Bowl, being shared by nearly 1.7 million people in social media, according to the Viral Video Chart run by Unruly Media.

Second was the official teaser for the movie “Star Trek: Into Darkness”, about 1 million behind with just over 696,000 shares.

The Budweiser ad has been viewed on YouTube more than 6.3 million times.

The foal used to make the ad is an up-and-coming Budweiser Clydesdale, who was just 7 days old when filmed for the commercial.

Unruly found that the ad was shared once online, on average, for every 3.6 views.

The music used in the commercial is “Landslide”, written by Stevie Nicks and performed by Fleetwood Mac.

The Super Bowl was fought out between the San Francisco 49ers and the Baltimore Ravens. The Ravens won 34-31.

An extended version of the ad is below.