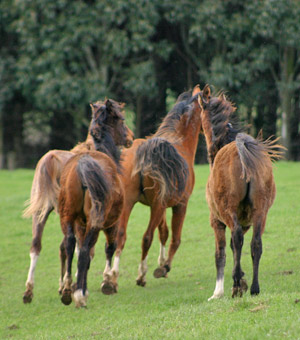 In all, eight horses tested positive for the drug among about 150 horses from which samples were taken – a small cross-section of the 10,000 or so animals that went to slaughter in Britain.

The news adds further fuel to the debate about the suitability of horses for slaughter, given their common role in Britain and the United States as companion animals.

Opponents of the slaughter trade in the United States are particularly vocal, arguing there is no reliable way of knowing whether American horses going to slaughter had ever been treated with the drug.

Europe requires all horses to have passports, in which such medication use can be recorded, thus disqualifying a horse from the food chain. However, the British test results indicate the passport system is not foolproof.

It is illegal in Europe for any horse which has received phenylbutazone, or “bute”, to enter the human food chain.

Of the eight, five were exported and entered the human food chain, Britain’s Food Standards Agency said. It is understood at least some of the meat ended up in France. None of the meat was sold in Britain.

The other three animals did not enter the food chain.

The agency said where the meat had been exported to other countries, the relevant food safety authorities were informed.

It said it carried out checks in slaughterhouses to ensure that horses presented for slaughter were fit for human consumption, in the same way it did for other animals, such as sheep and cattle.

It also carried out regular enhanced sampling and testing for phenylbutazone in meat from horses slaughtered in the UK.

During the recent horse meat incident, in which horse DNA was found in beef burger manufactured at three plants – two in Ireland and one in Britain – the Food Safety Authority of Ireland checked for the presence of bute and all samples came back negative.

So, what are the risks?

The professor of environmental toxicology at the University of Leeds, Alastair Hay, said: “According to the International Agency for Research on Cancer, phenylbutazone is not classifiable as to its carcinogenicity.

“There is no convincing evidence of its carcinogenicity in humans because in the individuals studied many other drugs had also been taken and any one of these might have caused the cancers seen. And there is no animal evidence either that it is a carcinogen.

“The reason the chemical is not for human consumption appears to be rare and idiosyncratic responses in humans to the chemical. These include aplastic anaemia and some other disorders of the bone marrow. But these are not cancer events.”

Professor Chris Elliott, director of the Institute for Global Food Security at Queen’s University Belfast, said:
“Phenylbutazone is a drug often used in horses to treat sore joints and aid recovery after fractures.

“Research has shown that when humans or animals were exposed to high levels there were adverse side effects such as bone marrow toxicity. Therefore it is not licensed for use in animals that go into the food chain.

“There is a system in place in Europe which should identify when horses have been treated with the drug to prevent them going for food production, but the effectiveness of this has been doubted by many.

“Thankfully, the residues of drugs such as phenylbutazone found in meat are very low and the risk to the consumer is correspondingly low. However, the use of veterinary medicines in all animal species that do go into the food chain is a matter of food safety and has to be treated seriously.

“In the UK and Ireland, as well as all other EU member states, there are systems in place to test samples of foods of animal origin of a wide variety of veterinary medicines. In the vast majority of cases, however, this testing is in the raw materials – meat, eggs, fish etc – and not on processed foods.

“This is a gap in the monitoring system which is in place to safeguard the consumer and authorities may feel the need to address this, particularly as we all consume so much processed foods these days.”

Professor Sir Colin Berry, emeritus professor of pathology at Queen Mary, University of London, said of phenylbutazone: “The compound has rarely caused blood dyscrasias even on those who have taken a lot for many years. The idea that you might get a clinically significant amount in horse meat even after therapeutic administration to the horse is, frankly, daft.”

“It has a licence for use in horses that have been identified in their passport as not being destined for the food chain.

“A Maximum Residue Limit (MRL) in meat has not been established for the use of bute in food-producing species because of concerns regarding the toxicity of the metabolites which could reside in meat from treated animals.

“Due to the lack of the MRL, bute is banned for use in food-producing species. The tracing system of horses for the food chain should pick this up and any horse having been treated with bute should be removed from the food chain.

“Unregulated horsemeat of unknown provenance (i.e., that which enters the food chain illegally) could have a risk of bute residue as it is a commonly used drug.”

A position paper on phenylbutazone produced last July by the independent Veterinary Residues Committee, and published by Britain’s agriculture agency, Defra, noted that the drug must not be administered to any animals destined for the food‐chain, but residues continued to be found in horses that have been slaughtered in the UK for human consumption.

The committee said it had repeatedly expressed concern over residues of phenylbutazone entering the food chain.

“This is because this substance has the potential for serious adverse effects in consumers, such as blood discrasia (a rare but very serious, life‐threatening, condition).”

It noted that in 2011, the number of samples taken for testing represented 1.86 per cent of all horses sent for slaughter for human consumption.

“Since 2005, all [EU] horses have been required by law to have a passport for identification.

“This document must accompany the horse whenever it is sold or transported, and contains a declaration as to whether or not the horse is intended for human consumption. If it is, the medicines that may be administered to that horse are limited.”

However, Defra had found in recent years that some vets were still prescribing phenylbutazone without checking the passport or ensuring that the horse was subsequently signed out of the food chain.

“Phenylbutazone residues have also been found in horses that have changed owners prior to going to slaughter, and whose passports do not indicate that they have been signed out of the food‐chain.

“Other residues have occurred because feed containing phenylbutazone intended for one horse has allegedly been eaten by another horse. Therefore care must also be taken to avoid other food-producing animals gaining access to treated feed.”

The committee noted that the number of horse samples which have tested positive for residues of phenylbutazone
had varied between 2 per cent to 5 per cent over the last five years.

“The committee understands that phenylbutazone is an important medicine to maintain the welfare of older horses and is widely used to treat horses that are kept as companion animals.

“However, keepers of horses and veterinary surgeons must comply with their obligations under the legislation in relation to administering medicines to horses that may be destined for the food chain, to avoid consumers being exposed to potentially harmful residues.

“The simplest way to do this is to ensure that the passport of any horse that has been treated with phenylbutazone has been appropriately signed to declare that it cannot enter the food chain.

“The Veterinary Residues Committee would like this message to be communicated widely, with the support of representative groups such as the British Horse Society, British Equine Veterinary Association and the Responsible Use of Medicines in Agriculture Alliance.”

2 thoughts on “Bute back in spotlight after slaughter revelations”