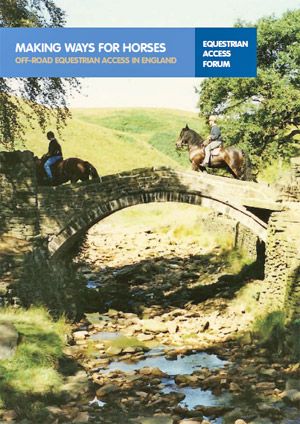 A new publication is highlighting proposals for the future provision of equestrian access in England.

The Equestrian Access Forum (EAF) has launched Making Ways for Horses, as part of its aim of the provision of a cohesive, comprehensive, integrated nationwide network, free at the point of use, with a horse, on a bicycle or on foot.

Making Ways for Horses sets out proposals for the future provision of equestrian access in England, many of which can be achieved under current legislation, which would help to address the lack of public rights of way currently available to equestrians.

The EAF is made up of the five main equine access organisations: The British Horse Society (BHS), the Byways and Bridleways Trust (BBT), the British Driving Society (BDS), the National Federation of Bridleway Associations (NFBA) and the South Pennine Packhorse Trails Trust (SPPTT).

Mark Weston, BHS Director of Access, Safety and Welfare, said: “It is a continuing travesty that horse riders have access to only 22 percent of the rights of way network and carriage drivers to only five percent. The proposals in this document would help to redress this unjustifiable imbalance.”

Catriona Cook, Chairman of BBT, said: “Horse riders and carriage drivers should be treated equally with other rights of way users. However, over the past 12 years four successive pieces of access legislation have removed equestrian rights, including ancient rights of access on horseback to moors, heaths and the foreshore.

“In addition, the public Forest Estate has dedicated access for the use of walkers only, while the equestrian rights of way network is becoming even more fragmented as a result of the Natural Environment and Rural Communities Act. Walkers have been given statutory access to the countryside at the expense of equestrians and cyclists.”

Sue Hogg, Chair of the NFBA, said: “We managed to stage the Olympics on time, but over the past 60 years the local authorities haven’t managed to record our public rights of way. In 2026 any unrecorded rights will be extinguished, but as yet there is no programme in place to get them recorded before the cut-off.”

Didy Metcalf, Trustee of SPPTT, added: “We estimate that around two thirds of our bridleways were wrongly classified as footpaths when the first legal record of paths was made; they still are. This existing, but hidden, network of sustainable routes is a wasted national resource. It must be recovered and preserved for the future benefit of horse riders and cyclists; not just for people on foot.”

Margaret Pawson, Rights of Way Coordinator, British Driving Society, said: “As a result of previous legislation carriage drivers lost access to many miles of Rights of Way, only partially replaced by the creation of Restricted Byways in 2000. We must now strive to further improve their access and the consequent safety of carriage drivers.”