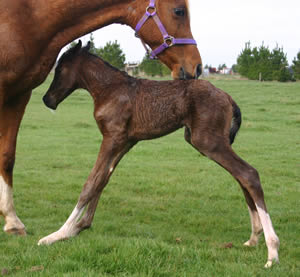 Researchers in Chile have come up with a new formula to make it easier to estimate a foal’s weight.

It is often important to know how much a foal weighs. Records of body weight can be used to monitor growth rate and ensure accurate dosing of anthelmintics and other medications.

Obviously a weighbridge or scale that measures the weight accurately is the “gold standard”. But often scales are not available. Visual estimates are often inaccurate. Many weight tapes are not intended for use in foals under six months age.

Various indirect methods of estimating the weight have been described. These usually involve a calculation based on measurements of parts of the body. While such systems might be practical in adult horses, they can present difficulties in uncooperative foals.

Researchers at the University of Concepcion in Chile have devised a formula that they claim provides a simple way of estimating a foal’s weight. A report of their research was published in the Veterinary Record.

The method requires only one measurement to be taken. The distance around the girth is measured just behind the elbow and 2.54cm behind the highest point of the withers. The measurement is taken just after the foal has exhaled.

Dr Rodriguez and colleagues measured 80 thoroughbred foals weighing between 50 and 250kg. Analysis of the data produced a formula that could be used to predict the weight from the heart girth.

A more complex formula (wt = G2.9945 x 0.000088, where G is the girth measurement centimetres) was found to give a more accurate result, but the scientists suggest that this might prove too complicated for use on the farm.

They also found that their method was not quite as accurate as one previously described by Staniar and others. However, it does have the advantage of simplicity. In addition to heart girth measurement, Staniar’s formula also includes the length from point of shoulder to point of buttock, length of the left foreleg and circumference of the knee.

The scientists recommend their new formula for estimating a foal’s weight on the farm. Not only does it give acceptable results from a single measurement, it is relatively simple and can easily be remembered.

» Working out the weight of your horse

First published on Horsetalk in September, 2007