Roozer Brewz is a tiny horse with a big problem.

The dwarf miniature horse from Kansas City was born with angular limb deformities.

But 15-month-old Roozer Brewz has more friends than he will ever realise.

The international community has started to rally to help pay for the significant medical care Roozer Brewz needs for a decent shot at life.

He has a Facebook page dedicated to his cause and has more than 1150 followers and the number is growing all the time. People are rallying to his cause to help meet his medical expenses, which could top $US20,000.

Owner Christine Clark has spoken of the emotion as word of Roozer Brewz’ plight has spread and people have stepped up to help.

“I don’t know if I could begin to explain the flood of emotions that have occurred over the last two days,” she says.

“I can tell you that I have cried, laughed and experienced a sense of overwhelming joy and amazement at the outpouring support for Roo.

“His journey hasn’t been a walk in the park, but I knew that the road was going to be long.

“After being recommended to euthanize him, we came home so I could do some soul searching.

“I sat on the ground, cross-legged in the dirt and watched him whizz by me running with his legs bandaged.

“I respect the veterinarian’s opinion and knew that if I made that choice to go against what the recommendations were, I was in it for the long haul.

“So every three days without fail for the last year and eight months, Roo has come into our house, down the hall and patiently waited as we did his bandage changes – all 200-plus times so far.

“I made the commitment to him, that if he continues to have a good quality of life, that I would continue to advocate for him.

“He is an absolute inspiration to me, so much more than people will ever know. I never imagined just how much. So here we are, hoping to get the funds needed for his surgery so Roo can help empower others. Because if you believe in something, it can happen.”

Roo now weighs about 50 pounds and is about 19 inches tall.

Due to the multiple complexities that he had at birth, along with conformation characteristics, he is classified as a dwarf miniature horse.

“He is very loved and cared for just as if he didn’t have a disability,” Clark says. “His disability has added so much character to his already spunky self.”

Roo was born on April 14, 2011. He was born with what are called “windswept” legs due to his position while in the womb. He also had severe angular limb deformities and tendon laxity on all four legs.

Clark says the complications with his legs were one of many challenges he has faced in his short life.

“He doesn’t give up or get frustrated with the challenges of everyday life. He has learned to compromise and if one way doesn’t work, then another will.”

When he was born, he could stand, but not long enough to nurse from his mother.

“I hand-milked mom and fed Roozer via a bottle for the first 24 to 48 hours,” Clark recalls.

“He would stand and nurse on occasion, but not long enough to really get what was needed. After working endless hours with my regular and wonderful vet on numerous attempts at establishing a way to support his tendon laxity. I was wanting a way for Roozer to get support, but that didn’t require surgery this early in his life.

She loaded him into the front of her Ford Focus and took him to the specialized equine facility Wilhite and Frees in Peculiar, Missouri.

He was evaluated by Dr Chris Wilhite and then seen by farrier Ed Reardon.

The consultation resulted in x-rays and then the manufacture and application of specialized shoes.

Within a week he was standing so much more and beginning to straighten out. Then came a setback.

A portion of bowel had herniated into his scrotal cavity, which required surgery.

Other setbacks followed, but Roozer Brewz fought on.

Then, came the day of reckoning for Clark, when she had to decide to push on with Roozer’s care, which would include the need for surgery on all four legs, or euthanize him.

“I had a flood of emotions. Do I euthanize him? Give him a chance? I felt a little selfish if I didn’t give him a chance to prove everyone wrong. He was such a great trooper. I swear that little guy has taught me so much about overcoming obstacles that are placed in our way. An absolutely true life lesson coming from my 19-inch horse.

“I was highly recommended to have him put to sleep due to his vast amount of complications unless I chose to have the corrective surgery on all four legs. I don’t have thousands of dollars to keep trying different fixes and surgery is just as costly.

“Roozer is a fighter and absolute huge will to live, not to mention a heart bigger than himself. I don’t want to be unrealistic, but he has been the barometer for my decisions.”

Clark made the decision to push on.

“As long as he is acting like a normal horse and not in pain. I continue my every 2 to 3 day bandage/brace changes.”

The cost of that every couple of days is about $US20.

“That seems so affordable when comparing to the thousands of dollars surgery will cost.

“But to ensure Roozer has the best quality of life, he has to have the surgery.”

“He will have to have surgery on all four legs, but the extent won’t be known until they are in there and can see exactly what needs to be done. We have contacted Kansas State Veterinary Hospital and another Equine hospital in Kentucky as well. I want what is best for Roo.

“We are raising funds to purchase Roozer a quad wheel cart/wheelchair. Eddie’s Wheels has offered to custom manufacture his cart. The cost is about $US900 for the physical therapy evaluation that is required for the fitting and measurement for the cart and the cart itself.

Funds are also being raised for the surgery, which will be needed when he is about two years old.

Clark stressed that Roo has always been the barometer of her care decisions.

“As long as he is not in pain or suffering, he will continue to bring HUGE smiles to the hearts of those he meets,” she says. 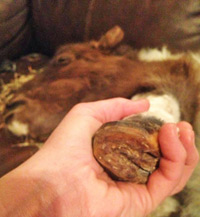 Online via Fundrazr where there is a donation link;
Or by visiting any US Bank location across the nation
His Facebook page is at http://www.facebook.com/RoozerBrewz/
Following him on Twitter at @RoozerBrew

7 thoughts on “Roozer Brewz: A little horse with a big heart”