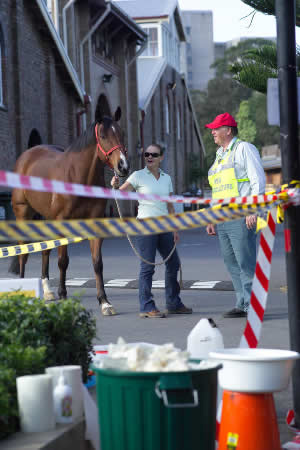 A class action over the 2007 equine influenza outbreak in Australia that cost the horse industry hundreds of millions has attracted at least 600 people.

Law firm Maurice Blackburn said on Wednesday that the number who had registered their interest in the action had already topped 600.

The deadline to join was two days later, on December 21.

The action will allege that the Australian Quarantine and Inspection Service (AQIS) is accountable for substantial losses in the horse industry when the flu virus escaped from the Eastern Creek Quarantine Station, in New South Wales, and spread across eastern Australia, between August 2007 and January 2008.

Maurice Blackburn class actions principal Damian Scattini, who is heading up the action with law firm Attwood Marshall, said: “The 2007 equine influenza outbreak had a devastating impact for many individuals and businesses, and a number of these are still struggling to recover five years later.

“These people experienced huge disruption to their businesses and livelihoods through no fault of their own, and they deserve to be compensated.”

The case will be brought in the Federal Court in Sydney in February, and is likely amount to several hundreds of millions of dollars.

In 2008, a 343-page report by retired judge Ian Callinan was released following a commission of inquiry. It included 38 recommendations for change, which the federal government set about implementing.

Callinan’s report outlined a litany of failings and shortcomings in the operation of the Australian Quarantine Inspection Services that, in his view, contributed to the escape of the virus from the Eastern Creek Quarantine Centre, near Sydney.

The retired judge said there was insufficient training and education in relation to procedures and instructions to be followed, and no checking to ensure that they were being implemented.

Nor, he said, did AQIS have any business plan or other reporting system to alert senior management to these failures.

There was a lack of effective supervision and monitoring of people entering and leaving the station, which he described as understaffed.

He said the station was not adequately funded to enable it to properly discharge its quarantine management functions, and the national programme was also inadequately funded, he said.

“There was evidence that, had a cogent case been made for additional funding, the government would probably have provided it.”

He added that those who treated and cared for the horses in Eastern Creek — especially the grooms, private veterinarians and farriers — and the import agents and studs who employed or retained them, must take some responsibility for the failure of quarantine.

“Their failure to decontaminate themselves and their equipment contributed to the probable means of the virus’s escape from Eastern Creek.”

Callinan found that one of the four horses from Japan received into Eastern Creek on August 8 – the stallion Snitzel – was likely to have been infected with equine influenza.

It was also possible that one or more of the other horses from Japan that arrived in Sydney with Snitzel might have been contaminated with the virus but not infected by it.

Callinin also found that that some of the horses from Japan received into Spotswood Quarantine Centre on August 8 as part of the same shipment were infected with the virus, but there was no evidence to suggest the virus had escaped from there.

He said: “The most likely explanation for the virus’s escape from infected horses at Eastern Creek is that it did so by means of a contaminated person or equipment leaving the Quarantine Station.

“The contaminated person or persons or equipment are most likely to have been those associated with the care of the horses while in quarantine.

“Fundamental biosecurity measures were not being implemented in the largest government-operated animal quarantine station in Australia,” he said.

“Grooms, private veterinarians and caterers were given access cards and keys that allowed them to enter and leave the Quarantine Station and the equine enclosure at will.”