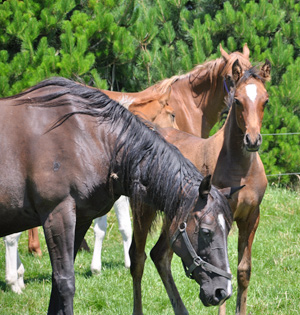 The absence of lifetime medical records for horse in the United States means it is impossible to guarantee a horse bound for slaughter is free of banned or potentially dangerous substances, the head of the Humane Society of the United States says.

Chief executive Wayne Pacelle, writing in his blog, “A Humane Nation”, says the export of North American horses to Europe for the meat trade has found its way into the headlines, for reasons other than animal welfare.

“And rightly so,” he writes. “The industry poses a potentially serious risk to human health and safety.

“American horses, whether companion animals, show horses, pleasure horses, or racehorses, receive a myriad of veterinary drugs throughout their lifetimes.

“Racehorses, as reported by Joe Drape in the New York Times, are often given drugs to enhance their performance — including painkillers, phenylbutazone (anti-inflammatory drug a.k.a. “bute”), clenbuterol (bronchodilator) and other legal and illegal drugs.

“Although many of these drugs carry the warning, ‘Not for use in horses intended for human consumption’, this warning is virtually meaningless since American horses do not have lifetime medical records.

“In addition, almost all American horses receive common veterinary drugs, such as bute, which have been deemed so dangerous that there is no acceptable withdrawal period.

“That means that if a horse receives a drug such as bute even once in his or her life, that animal should never be slaughtered for human consumption.

“In the absence of lifetime medical records, it is impossible to guarantee, regardless of where they are slaughtered, whether a horse is free of banned or potentially dangerous substances.”

Pacelle said the annual slaughter of more than 100,000 American horses in Canada and Mexico requires that these horses are required by law to be free of specified drugs for six months.

“It is widely acknowledged, however, that there is a high level of fraud involved with the equine identification documents. International government audits have confirmed these findings.

“For instance, the European Commission’s 2012 audit of EU-approved equine slaughterhouses in Mexico noted that there are significant problems with the identification of live horses and the sworn statements by the owners on medical treatments.”

“If altruistic concerns won’t get the job done, then perhaps naked self-interest will.

“No consumer, and no regulatory agency, should sanction trade in any kind of meat potentially laden with such contamination and obvious health risks.

“And with polling results from Humane Society International, released last week, that show overwhelming support in Belgium, France and Italy for a ban on horse meat imports from countries such as Mexico and Canada that do not meet EU food safety regulations, this is not an impossibly heavy lift on the political side.

“The bottom line is that horses are not raised for food, but they are used in a variety of industries and settings where substances that are forbidden or potentially dangerous for human consumption are injected or fed to them.”

One thought on “Safety of US horse meat ‘impossible to guarantee’”