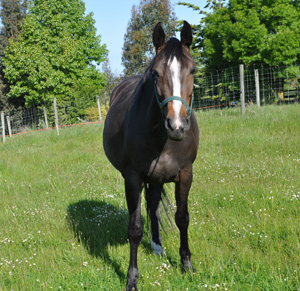 Exercise can affect the reproductive ability of mare, research has shown.

Researchers at Clemson University and the University of Florida examined the impact of exercise on mare reproductive health and embryo transfer. Their findings have been reported in the latest issue of the Journal of Animal Science.

In the study, researchers divided light-horse mares into three research groups: no exercise (the control group), partial-exercise and full-exercise.

Their goal was to measure reproductive blood flow and embryo number and quality.

Results from the study showed that exercise induced greater cortisol concentrations in horses. Cortisol has been shown to have effects on reproduction.

Embryo recovery rates were reduced in exercised horses compared to the control group.

“This led us to conclude that exercise was just as detrimental, if not more so, to the time period just prior to and during fertilization,” said Christopher Mortensen, co-author of the study and assistant professor at the University of Florida.

The impact of exercise on early pregnancy is still an area that needs further research.
Researchers are looking to study embryo quality because advancing technology has allowed embryo transfer to become a vital part of the horse industry.

“What we hypothesize is the reduced hormone concentrations may be having an effect on the mare’s oocytes, meaning they are not as ‘competent’ and have a reduced ability to be fertilized, or if fertilized, compromised embryo development,” said Mortensen.

These findings could have implications for human pregnancy.

“While many studies in women have shown intense exercise can be detrimental to female pregnancy, there are virtually no studies examining maternal exercise and effects on the early developing embryo.

The article, “Impact of moderate exercise on ovarian blood flow and early embryonic outcomes in mares” can be read in full at journalofanimalscience.org.