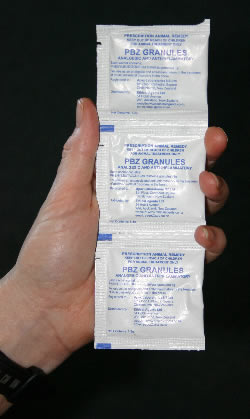 Bute is a great anti-inflammatory painkiller but care is needed over its use, writes Neil Clarkson.

It’s called phenylbutazone but most horse owners know it as bute. It is one of the most common drugs prescribed for horses and has been used with much success for decades, particularly in the treatment of pain from lameness.

It has provided relief for countless thousands of horses, and is a key drug in every horse vet’s arsenal.

But how safe is it? Many horse owners will have a few sachets or tablets left over from an earlier course of treatment. Perhaps your vet even left you a few extras for a rainy day.

Some horse owners might assume that bute is every bit as safe as many of the over-the-counter painkillers we buy for ourselves.

But bute does carry risks for horses, particularly when used inappropriately or given to unsuitable horses. These risks can be minimised by careful management of the dose and proper assessment of the suitability of each horse.

There are certain pre-existing conditions which generally rule out the use of the drug. These include blood disorders, gastric ulcers, congestive heart disease and kidney problems.

Much care needs to be taken over the dose. Horses can suffer serious and long-term harm if they are overdosed, and the “safe window” is actually quite small. Medically speaking, it has a narrow therapeutic window and can have toxic effects if the recommended dose is exceeded.

It is also important to establish whether bute is appropriate for your horse’s ailment. For example, inflammation resulting from infection should never be treated by bute.

In short, those few sachets of bute in your medicine chest may be just what your horse needs, but you should always consult your vet to be sure it’s safe to use.

Bute is among a group of medicines known as non-steroidal anti-inflammatory drugs, or NSAIDs. It is available in granules, tablet and paste form for administering by mouth, and in liquid form for injection.

It is not an anaesthetic and will not deaden pain completely, but it certainly has a powerful analgesic, or pain-easing, effect.

Bute binds strongly to proteins in a horse’s blood plasma and begins circulating. It works by knocking back the production of prostaglandins, a body chemical which plays an important part in the body’s inflammatory response.

An area which is injured, inflamed, hot, and tender will be awash with prostaglandins.

It will reduce the inflammation and therefore ease the pain. It is, in short, a very effective means of dealing with localised inflammation and pain in damaged soft tissue. Bute and other NSAIDs work in a totally different way to powerful narcotic steroidal painkillers that behave like certain brain chemicals and can have serious side-effects, including addiction and behavioural changes.

The beauty of NSAIDs such as bute is that they are non-addictive and have no mind-altering effect. There are no withdrawal problems – you can stop giving bute and provided the horse is over the initial source of discomfort, it will get on with life as normal.

Bute does not give your horse any kind of buzz. If the animal seems more laid back or perky on the drug, it more likely because its outlook on life has been improved through a reduction in pain.

It’s little wonder, therefore, that vets reach for bute to ease the painful symptoms of lameness or musculo-skeletal problems.

It’s important to remember that bute – indeed, any NSAID – will not fix anything. It will reduce inflammation and therefore pain, and make the horse more comfortable while its injury or problem heals. Often, the reduction in inflammation will help the healing.

The picture thus far seems very rosy. Here is an effective anti-inflammatory agent that effectively eases pain and is non-addictive. It’s cheap, too, compared to alternatives such as Banamine, although vets may feel that the latter is a better treatment option for some conditions.

However, researchers have identified a number of important risk factors associated with bute. As more information has become known, vets have been tending to lower the dose and shorten the duration, especially at higher dose rates.

A horse in pain might be given an initial dose-rate of four grams per 450kg (1000 pounds) of horse per day, and two to three grams per 450kg if given by injection. Usually, vets will prescribe a dose towards this higher range and then quite quickly drop the dose rate.

A dose will lower a fever quite quickly but it is likely to be 12 hours before you see any effect on inflammation: the area will still be awash with prostaglandins and they will first need to naturally break down.

Bute does not last in the system for too long, hence the daily allowance is divided into two or three doses a day. The point of dosing two or three times a day is to maintain the level of bute in a horse’s system at an effective level. It’s worth remembering that if you’re feeding hay, the rate of absorption can be slowed by some hours.

Twenty-four hours without the drug and the level will drop to a point it is no longer effective.

A vet is likely to drop the dosage, perhaps as low as one or two grams in total a day, as quickly as possible, especially in light of evidence pointing to the perils of higher doses.

They may want to lower the dose to see at which point the inflammation returns. Once it does, the dose can be lifted a little to reduce the inflammation. This way, they can get a horse on the minimum effective dose, which is important if the horse is likely to be on bute for a while.

Longer courses at low dose rates pose relatively few risks for healthy horses. As indicated, it is non-addictive and its effectiveness does not diminish over time. Some animals, such as those with problems with arthritis, can be on low doses for long periods, perhaps even the remainder of their life.

A horse can be taken off the medication quite quickly, although many vets and horse owners usually prefer to gradually ease the dose back in case the original injury is still present and the animal finds itself in pain again.

Dosing by mouth is safest way of giving bute. It is odourless but has a bitter aftertaste so will normally need to be given with food.

Vets must take care in giving the drug by injection. It needs to go into a vein and not into muscle tissue, otherwise abscesses can result. It must not go straight into an artery, either, as this can cause the animal to collapse and suffer seizures – probably because too much bute gets to the brain all at once.

An important thing to consider in using bute is the fact that you are treating the symptom – pain and inflammation – and not the problem. While your horse might appreciate the pain relief, you must not forget to take the necessary steps to remedy the initial problem.

It may be an injury that simply requires time and rest, but if further measures are necessary then take them. Realise, too, that the pain relief may make the horse appear sound before he actually is. Don’t be tempted to put the horse back into work when it is still on bute. You risk more damage.

From that point of view, bute has the disadvantage of effectively reducing your ability to determine whether the therapies being used to fix the initial problem are actually working.

As a general rule, do not make a final assessment of your horse’s recovery until it is off bute.

The masking factor is important to consider if you’re ever tempted to give your horse a relieving dose of bute pending your vet’s arrival. It will make it harder for the vet to properly assess the seriousness of your horse’s condition.

There are other factors to consider. There is research that points to bute being a factor in gastro-intestinal ulcers, kidney damage, formation of blood clots, and even liver damage.

Correct dosage is critical. Horses given as little as 50% more than the maximum suggested daily dose rate have died within a week.

The drug has also been linked to loss of appetite and depression.

One US study found that horses on the maximum four-gram-a-day oral regime for only four days began to lose their appetite, become depressed and develop intestinal and kidney problems. The drug appears to decrease the flow of blood to the kidneys, causing retention of water and sodium, which poses added risks for horses with a congestive heart condition.

Other studies have also linked bute to ulcers in the mouth, stomach and intestine. Scientists believe the drug suppresses a form of prostaglandin that plays a role in protecting the gut lining.

Little wonder, then, that vets are cautious about their dose rates and are keen to drop the dose quickly to the minimum effective rate.

Dosing accuracy can be improved even further if you know the exact weight of your horse.

Foals, particularly those with a heavy worm burden and/or under-nourished, seem at greater risk of harmful side-effects. The risks are greater for horses suffering from dehydration. A vet may want to rehydrate an animal before giving bute.

There are certain circumstances when bute, or indeed any NSAID, should not be used.

The evidence paints a clear picture of why caution is needed over use of bute. The drug is unquestionably a highly effective treatment for pain and inflammation but much care is needed over dose rates. Horses on lower dose rates for longer periods should be monitored carefully.

A horse going off its food or appearing depressed are danger signs.

Owners should watch for loose stools or diarrhoea. There may be ulcers inside the mouth. Unfortunately, by this stage, the horse’s health may have been seriously compromised.

The best early-warning system for gastro-intestinal and kidney problems is to test the horse’s blood for protein levels. Falling protein levels provide a clear indication that it’s time to stop giving bute.

The key strategies are to keep doses as low as possible and to maintain the higher initial dose rates for as short a time as possible.

Bute is highly effective and it is a key drug in any horse vet’s medicine chest. Millions of horses have benefited from a course of the drug, in terms of helping their recovery and easing their discomfort.

However, the take-home message is clear. It’s in a different league to the off-the-shelf medications you might take for a headache or sore shoulder.

The safety window is quite small and incorrect dosing risks death, depression and organ damage.

Those few sachets of bute in your equine medicine chest may one day prove very useful – but always ask your vet first.

4 thoughts on “Bute and horses: care is needed”