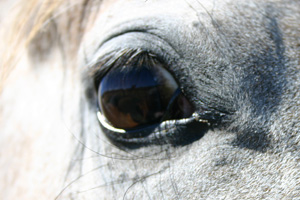 In her quest to find out if horses could see colour, Waikato graduate student Tania Blackmore searched literature, but found that the answer was not clear, writes Jenny Chandler and Mary Foster.

Blackmore, a graduate student in the Department of Psychology at the University of Waikato, found out that, even though the horse has been domesticated for thousands of years, whether they could see colour or not was not clear.

In order to see colours an animal has to have receptors that respond to different colours (wavelengths) of light.

These are found in the retina at the back of the eye. Humans have three types of colour receptor cells (called cone cells) in their eyes, giving them the three colour system most of us are familiar with. Microscopic examination of the horses eye shows them to have two types of cone cells and so they should have colour vision but perhaps this will be limited in comparison to human colour vision. Which colours horses can detected cannot, however, be established with a microscope, only horses themselves can answer that question.

Tania designed a research study to ask the horses this question and she carried it out as her Masters thesis. Tania and Jenny Chandler (the Psychology Department’s animal research technician) constructed a special stall to use for this study. The stall had a table with two levers (rods) sticking out of it and with a feed bowl between them. When a horse was in the stall it faced these levers. Behind each lever was a screen and in the experimental sessions pairs of slides were back projected onto these screens. One slide of the pair was always one of three shades of the colour being tested and the other was one of a range of grey slides (which side each was on was decided randomly). The horse was given food (NRM favouritte) on some of the trials on which it pressed the lever in front of the coloured screen but not on every one of these trials. This intermittent delivery of food allowed more trails per session than would have been the case had food been given every trial.

There were three different shades/brightnesses of each colour slide and each one of these was paired with a brighter, similar, and dimmer grey slide, making nine slide pairs.

This was to make sure the horses could not do the task based on the brightness of the slides, that is to make brightness an irrelevant cue. In every session the horses were presented with each of the nine slide pairs (selected randomly) 20 times, making 180 trials each session. Only one colour was tested at a time. The colours used were blue, red, yellow and green. Each horse was exposed to the colours in a different order.

Four horses helped with this research. The first was a pony called ‘Red’ who helped develop the equipment. Once this was done three horses, Ginger, Candy (a mare) and George, took part.

The criterion the horses had to meet before we started the next colour was either five consecutive sessions with more than 85% correct (showing they certainly could do that task) or at least 20 sessions with no improvement.

Each horse was exposed to the colours in a different order to ensure this did not have an effect. When all colours had been tested the horses repeated either their first colour or a colour for which they had failed to make the criterion, this was to check that performance was not affected by experience.

The graphs show each horse’s data from each colour with percent correct for each session plotted on the y-axis and session number on the x-axis. The graphs are presented in the order the colours were used for that horse.

All horses learned this task reasonably quickly and soon had five consecutive sessions above 85% correct, even when it was the first condition they experienced.

This was not so easy. None of the horses managed five consecutive session above 85% correct. Candy and Ginger got close, showing they could do the task to some extent, but that they could not make this discrimination as easily as they had blue vs grey. Red (the pony) had more than one go at this colour and although better than chance he never managed a high per cent correct. George is currently working on this condition but it doesn’t look like he’ll be any different, he is still performing at around 50% (chance level responding).

Candy, Ginger and George were all able to discriminate yellow from grey and learned the task quite quickly. Red was not as good on the task but performing above chance levels and almost made the criterion!

This one is interesting it gave us results that appear to depend on the previous experience. Candy, Ginger and George all reached criterion, Red did not.

The graphs show that when a horses was changed from one colour to another their accuracy would normally drop to chance levels for a day or two. This did not happen when the change was from green vs grey to yellow vs grey or vice versa and the horse had been successful on the first of these to be presented. This can be seen clearly for Ginger who, after taking 28 days to complete green vs grey, moved on to yellow without dropping in accuracy – staying at around 90% correct.

It is also interesting to note that, while Red did not reach criterion with green vs grey on either of his two attempts, his performance on green vs grey improved after he had been exposed to yellow vs grey.

So what is the answer to the question Tania was asking – Do horses see colour?

The answer is yes.

More research is now needed to answer the questions this work has raised. Can horses tell the various colours apart? We will have to wait and see!

This article was written in 2008 by Jenny Chandler and Associate Professor Mary Foster, of Waikato University. Questions or comments: Jenny Chandler chandler@waikato.ac.nz.

9 thoughts on “Color vision in horses: Do horses see color?”