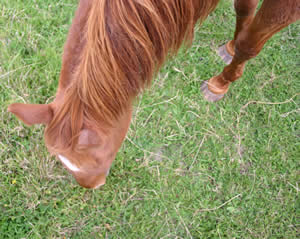 About 25 years ago, New Zealand researchers discovered that tiny fungi called endophytes were the cause of ryegrass staggers.

They discovered that mycotoxins produced by the endophytes living within ryegrass cells could affect livestock, causing them to tremble and lose co-ordination.

The toxins, it was learned, affected part of the brain’s cerebellum involved in muscle co-ordination.

The 1982 breakthrough paved the way for development of strategies to minimise the nerve and muscle disorder, which affects horses, sheep, cattle, alpacas, and some species of deer.

Strategies include the use of low-endophyte grass varieties to minimise animals’ exposure to the toxins. More recently, effective binding agents have come on the market that mop up the toxins, allowing affected animals to excrete them in their faeces.

Symptoms of ryegrass staggers include:

In recent years, evidence has been mounting that the affect of the toxins on horses may be more widespread than originally thought.

While the trembling and staggering problems make severe cases easier to diagnose, many owners believe that behavioural problems that have inexplicably developed in some horses have been caused by mycotoxins.

The evidence at this stage appears to be largely anecdotal. While not overwhelming, there is no doubt that a significant body of evidence is building.

Large numbers of horse owners report improvements in the behaviour of horses moved from a suspect pasture, or given a regular dose of a mycotoxin binder.

The risk, of course, is the temptation to blame all aberrant behaviour on mycotoxin poisoning.

Having said that, a horse owner seeing behaviour that is out of character, such as nervousness or strange responses, would be well advised to consider mycotoxin poisoning as a possible cause.

There is no doubt that horses show a wide variation in their susceptibility to mycotoxins. Thus, two horses grazing on the same pasture and, presumably, ingesting similar quantities of mycotoxins, could well result in one suffering a severe case of staggers, while the other shows no obvious symptoms.

Ryegrass staggers is only fatal in the most severe of cases. Most horses will be well within one or two weeks, once the toxic feed source has been removed from their diet. Feeding a mycotoxin binder is likely to hasten recovery.

It is important to note that many horses have suffered serious and even fatal injuries resulting from their poor co-ordination while affected by the toxins. Great care therefore needs to be taken with affected animals.Animals with the disorder will tend to lose condition rapidly. They will not be grazing nearly as much as usual, and may not be drinking as they should.Staggers tends to be a seasonal problem, with the toxins seeming to be at their most potent during warm and dry periods. The endophytes are usually concentrated in the base of the leaf sheath, and in seed heads. The state of the paddock may therefore have a major bearing on the quantity of mycotoxins a horse is ingesting.

Horses forced to graze on pasture which is already grazed down will be eating mostly the base of the plant, which will likely result in higher consumption of mycotoxins.

Strategies to minimise the risk of ryegrass staggers

There can also be a problem in the warmer months, when the ryegrass has developed seedheads, which the horses will happily be eating. The problem can continue well into autumn.

Studies indicate that variations in toxin levels can result from stress on the plant. The problem is worse in dryer conditions. Rising mycotoxin levels may even be a response to insect attack.

Thus, the risk is likely highest during a dry summer.

While ryegrass contains a number of different endophytes, the one that is known to cause ryegrass staggers is Neotyphodium lolii. It produces a toxin called Lolitrem, named after Lolium (the scientific name for ryegrass) and trems, in reference to the trembling that results. It also releases two other harmful mycotoxins – peramine and ergovaline.

While a blood test is available to test for lolitrem levels, veterinarians will usually diagnose ryegrass staggers on the basis of a horse’s behaviour, also taking into account the pasture the animal is on, and any evidence such as dry conditions or other nearby cases that might indicate that mycotoxin levels are high.

The veterinarian will suggest removing the horse to a different paddock, either with little or no ryegrass, or one known to be sown with a low or endophyte-free grass variety.

If available paddocks are unlikely to be any better than the one the horse is already grazing, the other option is to shut the animal up and rely on a diet of hay and/or baleage, and other supplements. Ensure plenty of fresh, clean water is available.

It is essential to reduce the toxin intake, as it has a cumulative effect. The more of the toxin in a horse’s system, the worse its symptoms will be.

While animals need to be monitored closely, do not stress the horse unnecessarily. If your presence appears to create anxiety in the horse, do not approach unless you have tasks to perform such as checking the water, providing feed, or dunging out. Remain quiet and calm around the horse, and do not do anything likely to increase stress levels.

Mycotoxins are not just restricted to ryegrass.

There are plenty of other fungi living on and within other edible plants that can cause neurological problems that display identical symptoms to ryegrass staggers.

In fact, there are about 300 mycotoxins that scientists believe demonstrate toxicity in people and animals.

In conserved forage such as hay, haylage, silage and baleage, dangerous levels of mycotoxins will usually be apparent due to the visible presence of moulds. Even if moulds can’t be seen, most horse owners should be able to detect their presence due to a sharp, almost metallic smell in the feed.

Horses will generally refuse to eat it, unless very hungry. It should not be fed out, in any case.

Mycotoxin binders essentially have a mechanical action.
They bind with the mycotoxin, preventing their passage through the wall of the gut and into the bloodstream.
In the end, the mycotoxin and binding agent harmlessly pass through the horse, exiting in its droppings.
A number of agents have proved successful as mycotoxin binders.
One type has been developed from the cell walls of yeast.
Some clays that display suitable absorption properties have also been used successfully as binders.
There is no evidence that these binders have any toxic effects.

The situation is different with grains, where the presence of mycotoxins is unlikely to affect palability. Grain mycotoxins will rapidly pass through a horse’s intestinal wall and, in large enough doses, can be fatal.

Research into the effects of mycotoxins on horses has increased in recent years, in part due to a wider recognition that the problems they cause are widespread and significant.

Mycotoxins are under suspicion as being involved in a number of other horse-related problems, including wider neurological problems, over-sensitivity to some stimuli, and even brain lesions.

There are suspicions that long-term exposure to low levels of mycotoxins may cause gradual damage to some organs.

While major strides have been made in understanding mycotoxins and the problems they cause, it is clear that much more research is needed.

• Research into staggers could save millions 24.5.07

One thought on “Ryegrass staggers: the danger to horses”