The head of Equestrian Sports New Zealand has signalled that the FEI is expected to more than double the country’s annual membership fee.

ESNZ chief executive Jim Ellis, writing in his blog from Istanbul, where nations met this week for the FEI General Assembly, said the proposal was expected to be ratified the following day.

Ellis said that the move would not affect FEI event levies.

He said that several of the more “established” equestrian nations had been stung by the increase, which came as a result of the FEI taking a more user-pays approach to its annual subs.

“[It is] a principle which New Zealand endorses, regardless of the increase, and which runs similar to our own internal thinking regarding upfront ESNZ membership fees.

“Fortunately the increase will be phased in over three years to ease the pain. 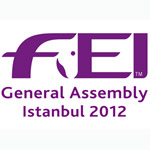 “An interesting stat to come out of this discussion was that Australia and New Zealand deliver more FEI events than the whole of Africa and Asia combined; and more than the Americas combined when the United States is removed from the equation.

“These figures have been significant in raising the status of Oceania within the FEI and the appreciation of our views when aired.”