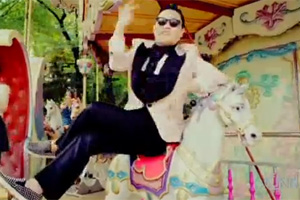 He tried and rejected elephant, monkey and kangaroo moves. Even slithering snake manoeuvres got a try-out.

He finally decided that his horse moves were the answer, he said in an  address to  the Oxford Union debating society.

Online music magazine NME reported Psy as saying: “I stayed up for 30 nights to find that horse-riding dance.

“I tried every creature: elephant, monkey, kangaroo, snake. The kangaroo hopping was too slow, so we ended up imitating a horse.”

Psy explained he invented the horse-style dance featured in the video after being offered a spot dancing on a television show.

“I was so desperate to get noticed I went to a TV production company in Korea and started doing a dance – a crazy dance – up and down the corridors,” he said.

He go the spot on the show.