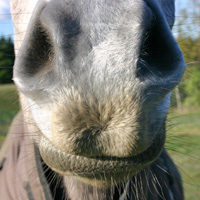 A stallion used a horse whisperer to dob in his master, who was cheating on his wife, the Daily Record in Scotland reports.

The newspaper quotes animal communicator Anne Dee, 56, of Ayr, who was summoned to get to the root of the problem with a depressed stallion.

Dee said the stallion confessed he was worried the couple who looked after him were going to split up.

He said the husband had been romancing his perfume-laden mistress in front of him, and that he did not like her.

She petted him too much, the stallion explained, and her perfume was too strong.

Dee told the Daily Record that the man’s wife was present at the session and she felt obliged to reveal the stallion’s remarks.

She revealed her long-held suspicions and the marriage ultimately fell apart, with the wife taking custody of the stallion.