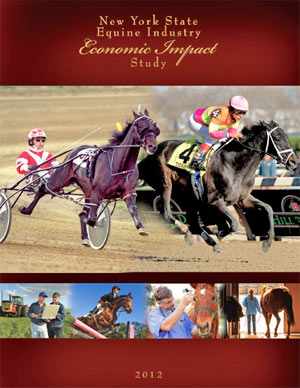 The equine industry has a $US4.2 billion effect on the economy of New York State and generates 33,000 full-time jobs, a study shows.

Equine commerce results in $US187 million in state and local taxes for New York, it says.

The study pointed to the tough times experienced by the state’s thoroughbred industry in recent years, but pointed to a significant turnaround in 2012.

The findings are contained in the New York State Equine Industry Economic Impact Study, which concluded that a thriving equine industry was vital to the health of the state’s economy.

The report says the thousands of horse farms, training centers and riding stables doing business across the state preserve 1.3 million acres of open space. There are 157,500 horses in New York.

“The study shows, in black and white, that every horse in New York is a potent job creator. The horse should be our state animal. But it comes as no surprise that the equine industry creates tens of thousands of jobs.

“There is so much that goes into the raising and training of a horse. It is a very labor-intensive business.”

New York’s racing industry engenders a particularly strong work force. The study demonstrates that there are 80 jobs for every 100 racehorses in New York. In addition, each individual racehorse has an economic impact of $US92,100 on the state’s bottom line. The racehorse population is 23,100.

The equine industry contributes to the local economies of every one of New York’s 62 counties. In addition to the 2300 breeding, training and racing facilities across the state devoted to standardbreds and thoroughbreds, there are 23,000 family-owned farms and stables, as well as commercial enterprises that include show horse operations, boarding and riding stables, and breeding farms for recreational and show horses.

Every member of  the equine industry in turn supports state and local businesses.

State Senator John Bonacic, chairman of the Senate Committee on Racing, Gaming and Wagering said: “New York State is moving in the right direction with respect to the horse racing industry.

“The industry though, is greater than what you see on the track. It includes jobs in rural communities … and it includes direct tourism in destination communities like Saratoga.”

Horses are one of the leading agricultural commodities in the state. “The equine industry is tremendously important to agriculture in New York State,” said Dean Norton, president  of the New York Farm Bureau.

According to a study released in 2005, the state’s racing and recreational horse industries had an economic impact of $US2.4 billion.

Despite a national and global economy crisis in the interim, equine commerce has enjoyed a 75 per cent increase,
underlining the success of the state’s investment in the industry.

New York State Assembly Racing & Wagering Committee Chairman Gary Pretlow said: “Our goal must be to ensure that our agriculture and racing industries can continue  to grow and thrive in New York State.”

Over the last decade, the number of standardbred broodmares in the state has grown 25 per cent, and stud fees for New York’s standardbred stallions has risen 140 per cent.

Between 2004 and 2011, the state lost more than 4000 thoroughbred industry jobs. One hundred of New York’s 400 Thoroughbred farms closed, and the New York  thoroughbred foal crop dropped 34 per cent.

More than half of the thoroughbred breeding stallions were shipped out of state. But 2012 witnessed the rebirth of the local thoroughbred industry.

Five-hundred new broodmares were relocated to New York this year. Through May 2012, there was a 39.4 per cent increase in the number of foals reported. Farms are reopening and renovating, and breeders from Kentucky have begun sending stallions to New York.

The report can be read at:  http://www.nytbreeders.org/pdf/EquineStudy.pdf