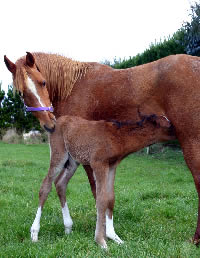 Do new foals benefit from human handling? Does “imprinting” work? Should humans stand back from the mare-foal relationship? Neil Clarkson looks at scientific studies suggesting we could be getting too close, but discovers there may be an easy path to a foal’s heart.

Foals are cute and so easy to love. Many horse owners simply can’t resist giving them a cuddle. Others launch into “imprinting” – a technique involving rubbing a foal’s body all over to get them used to human contact.

But do foals benefit from the handling? Are we interfering in the crucial relationship between a new foal and its mother?

Research conducted in France suggests new foals may not only be unimpressed by early handling, but that the attention actually makes them less approachable than foals that have not been handled.

Two French studies conducted at the University of Rennes looked at issues surrounding foal handling and human intervention in the mare-foal relationship.

The first study explored the influence of the dam on the human-foal relationship. The second looked at how various forms of human-foal contact affected later contact with the foal.

The studies were conducted by Severine Henry, M.A. Richard-Yris and M. Hausberger, with D. Hemery also involved in the first study.

The authors, in their investigation of foal handling, said that while human involvement with pet animals such as cats and dogs has been well explored, only a small amount of research has been done involving domestic ungulates.

Humans, they point out, are well aware of the importance of touch to babies, and often assume that stroking or gently handling an animal will have positive effects.

However, horses – in common with many ungulates that produce only one offspring at a time – do not indulge in much physical contact.

Suckling aside, mares lick their offspring only occasionally. A study has shown newborn foals are licked by their dams for only 30 minutes or less during the first four hours after birth.

In more mature animals, mutual grooming has been shown to take up only 2% to 3% of a horse’s time, and normally is restricted to the neck and withers.

Even when horses smell each other, direct skin contact is not common.

“Do all species perceive stroking the same way?” the authors asked. “How [do we] know what is a positive stimulation for another species?

“We often assume that stroking or gentling an animal has positive effects.”

While this may be the case for some species, they said, differences in species should be expected.

The study on foal handling involved newborns at two breeding establishments in Correze, France, in 2003-2004.

All 41 foals, including the control group, had a person present at birth to provide any help for the mare, to vaccinate the newborn, and to treat the umbilicus.

The experimental foals were handled in three specific ways and their later reaction to people compared with the control group of foals, which received no additional contact other than routine management.

The study was divided into two experiments across two breeding seasons. The three forms of handling were:

The same foals were then assessed at two weeks old.

The same person returned to each stall and stood motionless near each mare for five minutes. The behaviour of each foal was monitored, including approaches within 50cm of the person.
Finally, the person tried three times a day to place a saddle pad on each foal’s back for five consecutive days, and the animals’ reactions were again recorded.When the foals were a month old, the person tried to approach each foal from a distance of 1.5m, from the side. The foals’ reactions were recorded. Each of these tests lasted no more than 60 seconds.

The authors found that the forced handling (both the stroking and forcing the foal to the teat) did not appear to have any beneficial effect on the human-foal relationship, when compared to the control group.

“Forced contact with humans at an early age, and in the dam’s presence, did not improve the ease of handling,” they wrote. “Bringing foals to the teat even seemed to induce a later reluctance for human contact,” they added.

The authors suggested that handling associated with restraint may not be viewed by foals as a positive event.

“More surprising is the later reluctance for contact shown by the brought-to-the-teat foals. They kept [their] distance and avoided the approach of the experimenter when two weeks old, were the most reluctant towards having a saddle pad on their back at one month, and [were] the only group whose performance did not tend to improve over the five days of the test.”

The authors said the earlier restraint of the foals may not have been the only factor that brought about their later reluctance. It was possible that negative responses by agitated mares when the foal was brought to the teat may have played a part.

The human interference in the suckling process also may have been perceived as an intrusion into the mare-foal bonding.

The authors suggested that stroking as a form of positive reinforcement may not be acquired by foals until a later stage.

On the contrary, they observed that “The mere presence of a motionless person seemed to bring slight positive effects” on the foal’s reactions to humans.

They also noted that, during the part of the study in which a person was motionless in the stalls, the foals’ degree of interest was influenced by the amount of interest the mare showed in the person.

This observation tends to reinforce the findings of an earlier study into the influence a dam can have on human-foal relations.

The study again involved 41 foals and their mothers. Twenty of the mares were not given any special handling, while the other 21 were given some food by hand and a gentle brushing for 15 minutes each day for the first five days after birth.

The authors noted that the protective behaviour of the mares decreased markedly over the course of the five days, whereas “the foals’ behaviour towards the experimenter changed between the first to the fifth day of mare handling”.

“The foals clearly showed more interest and trust towards humans at the end of this five-day period,” the authors noted, and more so especially when their dams were calm and friendly in the presence of the handler.

In addition, their reaction in a pasture to the approach of an unfamiliar male when the horses were 11-13 months old was also assessed.

From the age of 15 days, almost all experimental foals (of previously handled mares), but only very few control foals, could be approached and contacted. “Most control foals avoided or even escaped from the experimenter during the approach test.”

Almost all experimental foals even accepted a saddle pad on their back at one month without any training, while most controls were still reluctant to human approach.

The flight response of the experimental foals in all the tests was reduced considerably, or even non-existent, even among the youngsters around one year of age.

“These foals spent longer, at all ages, close to the experimenter and initiated more physical contacts (sniffing, licking etc) … whereas control foals appeared more fearful. “These effects seemed to have some lasting effects, at least until the age of one year,” they said.

The authors point out that, even though the five days of handling of the mares amounted to only an hour and a quarter of total brushing time during the first five days of the foals’ lives, the results strongly suggest that mares can significantly influence a foal’s positive perception of people in the short, medium and long term (but only if mares have a good relation with humans).

It seems, therefore, that the way to a foal’s heart is through pampering its mum – the simple act of brushing a mare 15 minutes a day for the first five days after the foal’s birth clearly has long-term benefits.

“This procedure is simple, takes little time and can easily be applied to any dam-foal pair,” the authors say. “It is not intrusive and presents no risk of disrupting mare-foal bonds.”

First published on Horsetalk on October 8, 2007

One thought on “Is human handling positive for a new foal?”