If the traditional equestrian disciplines of dressage, jumping and eventing aren’t your cup of tea, and you don’t have time to try reining or vaulting, then the new equestrian sport of Horseball could be for you!

Horseball began in France more than 20 years ago. The French Sports Federation wanted a new game for France to be played on a small arena, to be suitable for television and exciting for spectators.

Jean Paul Dupont, a rugby player who also owned a dressage school, looked at numerous ball games on foot, at polo, basketball, and rugby. He took a bit from each and came up with the game of Horseball.

The French now have more than 4000 riders competing in Horseball tournaments. They have League competitions all over France with audiences of up to 8000 at the larger venues. The French Equestrian Federation has made Horseball part of the riding instructor exam and support their International teams financially. There are Horseball Centres all over France and the French International team is made up mainly of riders who teach the sport professionally.

Any type of horse or pony can play. The majority of those used also compete in other disciplines, some at affiliated level.

Very little equipment is required – a size 4 junior football with a harness of 6 leather straps, a ‘pick up strap’ from one stirrup to another and normal bandage protection for the horse’s legs. Apart from that, normal, everyday saddlery is used.

The arena is usually on an all-weather surface but the game can be played on grass, an enclosed area (minimum 25m x 75m) is required.

Two teams of six riders must pick up a ball from the ground, without dismounting, and using a game of attack and defence attempt to score goals at each end of the pitch.

The game commences with four players from each team on the pitch. The ball is placed on the ground and has to be picked up in canter. The aim of the game is to win the ball (a small football, fitted with six leather handles); make a minimum of three consecutive passes of the ball (forward as well as backwards, unlike in rugby) between at least three team members, without dropping it, and to shoot it through a hoop 1 metre in diameter and 3.5 metres off the ground. 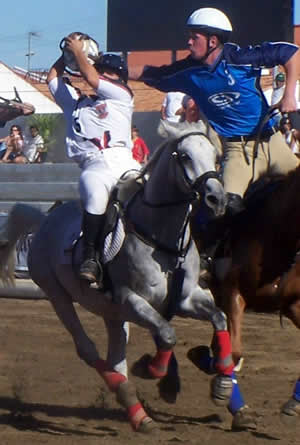 In a game of reasonable quality, the teams would expect to share perhaps 15 goals. After each score, or if the ball goes out of play, play restarts with a line-out contested by two players from each side. This is one of the clearest opportunities to gain control of the ball, so teams work hard on tactics to help win on their own throw-in, as in rugby. Otherwise, possession changes either in the tackle or when the ball goes to ground.

Tackling usually involves physical contact, though technically a player must grab the ball without grabbing its carrier. The carrier must hold the ball in one hand only while being tackled, but a challenge can often be evaded simply by holding the ball on the side away from the tackler. Effective tacklers overcome this by shoulder-barging the carrier to knock him/her off balance, at which point his natural instinct is to steady himself by pulling in the extended ball-carrying arm, giving the tackler a chance.

When the ball is dropped the player has to slide from the saddle and sweep it up, connected to his charging steed only by the stirrups that are connected by a belly strap – an act that requires much courage and is thrilling to watch, especially when two opponents race side-by-side to win the ball.

There are mounted and unmounted referees and a safety officer on the sideline, rules are strictly enforced.

Although the game looks fast and exciting it has an excellent safety record in comparison to other equestrian disciplines with very few accidents over the last 13 years.

What benefits are there?

As well as a new, fun and exciting method of exercising your horse, you will achieve a new understanding and confidence in the partnership between you and your horse as you are unable to use your reins at all times. Riding without your reins also improves your balance as you gain independence from the reins – putting more emphasis on being able to ride with your legs. 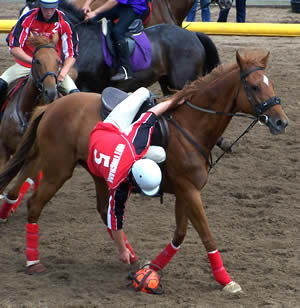 Horseball is a team sport and teamwork is an essential part of the sport.

Nowadays, great emphasis is placed in industry on working within a team so particularly for children, the game encourages team spirit at a very early age.

Horses and riding are known for being popular with the girls but this sport is definitely one to get the boys riding, many boys playing horseball actually learnt to ride in order to play and the game has as many boys and men playing as the girls and ladies.

Horseball is totally self funding, although an application is being made to join the British Equestrian Federation, our members are not eligible for any Government, Sports Council or lottery funding.

Although several companies have kindly provided individual teams with shirts and horse clothing in the past, no Horseball team has had sponsorship or support. The sport has now possibly higher visibility than many other equestrian sports with TV and media coverage and appearances at high-profile competitions and shows.

The nature of the game is such that it provided an excellent window for sponsors looking to support a fast, exciting spectator sport.

Internationally the sport is growing with Brazil Argentina and the Netherlands recently joining the Federation and India and Pakistan receiving training.

There are three European Championships held annually in different host countries each year. The French continue to maintain first place with Belgium regularly in second place.

The UK junior team received its first bronze medal in 2004, with the Ladies Senior team achieving the same result in 2005 and the British team 4th at the European Championships in Milan 2005.

Horseball has recently been presented to the FEI by the International Federation of Horseball in the hopes that one day it can be accepted as an Olympic sport.

(Note: Horseball and the FEI signed a Memorandum of Understanding in 2015)

What Do I Need?

To try Horseball, initially all you need is a standing martingale, a junior size (size 4) football (see above) in a leather harness and a leadrope, which will be eventually upgraded to a leather strap, to hold your stirrups together. Your horse must also wear 4 exercise bandages and 4 overreach boots, to protect their legs. Normal riding attire and tack are used.

• Horseball began in the UK in 1991 after France played its First Division final at the Wembley Horse of the Year Show.

Riders from across the UK got together to form the British Horseball Association, recognised by the British Horse Society as the governing body of Horseball in the UK. The Association has active Child Protection, Equine Welfare and Equity policies and has a group of registered Horseball trainers who are required to hold both child protection and first aid certificates.

There are teams competing in the senior, junior, cadet, and ladies-only competitions from all over the UK, to the South as far as Kent and to the North as far as Newcastle. Since playing at Sheffield Arena BSJA in April 2004, there has been a surge of interest in the game resulting in the need for training for quite a few new teams, particularly in the North.

2 thoughts on “Excitement in new equestrian sport of Horseball”