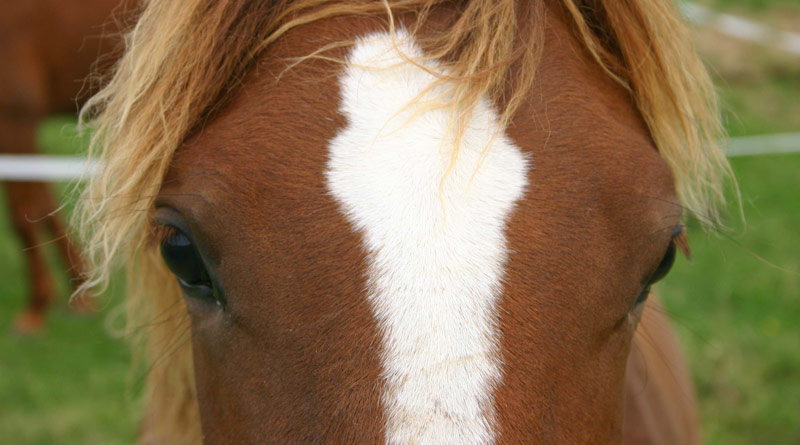 How intelligent are horses? It’s an important question, given our unique relationship with these animals.

People often try to draw comparisons between cats and dogs and horses. It’s difficult because each of the species draws on a totally different set of evolutionary values.

Cats and dogs are predatory animals, with well-tuned binocular vision to help hone in on their victims. They have an innate aggressiveness that you can guarantee even the most docile of cats or dogs will produce with the appropriate stimuli.

Horses have evolved as prey animals. They are the hunted. Their instinctive flight response and much of their complex interaction within a herd have grown from this basic premise: escape or be eaten.

There are some who dismiss horses as being instinctive rather than cognitive in their behaviour. While equines do display a well-tuned and instinctive flight response, the suggestion is clearly ridiculous for anyone who spends time around horses.

Horses quickly learn to recognise commands and body language. They understand the sounds of mealtime, such as the noise of a quad bike they know will be loaded with hay, or the rumbling of a grain crusher in a feed shed.

Yes, there is a herd mentality. But this can be seen in every herd species on the planet. The somewhat derogatory phrase also ignores the considerable complexities involved in relationships within a herd.

A Swiss consultancy firm was recently running management courses that explored equine herd dynamics. The firm’s view was that much could be learned about how to lead people from the way horses behaved within a herd. The consultants drew comparisons between herd behaviour and the way in which a company is run.

It escaped no-one’s attention that the head of a herd is an older mare, not a stallion. The lead mare is unambiguous in her communication, has the trust of other members of the herd, and, while her behaviour may not always win her friends, she is always respected by her underlings.

Researchers have looked at three key areas in trying to assess horse intelligence: the ability of horses to solve increasingly challenging problems, the speed at which they learn a task, and their ability to retain that knowledge.

These can be difficult to measure, with some assessments of intelligence relying upon alertness, a horse’s reaction to stimuli, their behaviour around people, and their interaction with other horses.

She says cognition and perception in horses have often been misunderstood.

Dr Hanggi, presenting a review of her research at the Equine Research Foundation into equine cognition, perception, behaviour, and training to the annual convention of the American Association of Equine Practitioners in 2005, said: “People proclaim that horses react only by instinct, that they are just conditioned-response animals, that they lack advanced cognitive ability, and that they have poor visual capabilities.

“Until relatively recently, there was little scientific evidence to address such beliefs.”

She said public and scientific interest in equine learning and perception had been growing.

“A review of the scientific literature, as well as practical experience, shows that horses excel at simpler forms of learning … which is not surprising considering their trainability.

“Most recently, and unexpected by many, Equine Research Foundation horses have solved advanced cognitive challenges involving categorisation learning and some degree of concept formation.”

Dr Hanggi said a comprehensive understanding of the learning abilities of horses is necessary to ensure that this species receives proper training, handling, management, and care.

“Traditionally,” she said, “horses have rarely been classified as intelligent, and even today, gaps in knowledge, myths and misconceptions, and limited research affect how horses are understood or misunderstood by the public, the horse industry, and even the scientific community.

“Common beliefs maintain that horses have a brain the size of a walnut; horses do not think; horses are merely conditioned-response animals; horses cannot generalise; horses have no sense of concept; horses are colour blind, have poor acuity and depth perception, and cannot transfer information from one eye to another.

“In reality, horses manage not only ordinary daily cognitive tasks but mental challenges as well. In the wild, they must cope with food and water of inconsistent quality or unpredictable distribution, predators that change locations and habits, and a social system in which identities and roles of individuals must be discovered and remembered.”

She suggests that domesticated horses may face even greater challenges, having to live in largely unsuitable or artificial environments. They must suppress instincts while learning tasks that are not natural behaviours, and must co-exist with humans who sometimes behave bizarrely – at least from an equine standpoint.

Horses are known to learn from:

Dr Hanggi said trainers and handlers should incorporate intelligent use of both positive and negative reinforcement in a well-balanced programme.

Suggestions that horses have poor spatial ability is simply not supported by the evidence, she says.

Dr Hanggi points out that vigilant horse-owners have remarked on how well horses find their way around areas they have only visited infrequently. Horses, she adds, also react noticeably when objects in their surroundings have been moved.

What then, of the suggestion that horses cannot recognise with one eye what they have seen only with the other eye? This, she says, is a myth used to explain why horses may startle at the same object when viewed from different directions. The Foundation’s interocular transfer research has demonstrated that horses can transfer visual information from eye to eye.

One theory that could explain why horses can be startled in such circumstances is that they may not always realise that an object is the same one when viewed from different angles.

Horses, she points out, are social animals that are comfortable in the company of other horses. One study revealed that that 72% of participating owners thought that abnormal behaviours could be learned by horses observing others.

However, no research has yet been conducted to prove this. “It is difficult to accept that horses cannot learn by observation in any situation,” she says.

“Many horse people believe, some even vehemently argue, that the learning abilities of horses do not go beyond the scope of associative learning and memory.

“Although a large amount of cognitive behaviour can be explained by these mechanisms, it is critical for the wellbeing of horses to study whether they possess more advanced learning abilities.

“If the cognitive abilities of horses are misunderstood, underrated, or overrated, their treatment may also be inappropriate. Equine welfare is dependent on not only physical comfort but mental comfort as well.

“Confining a thinking animal in a dark, dusty stable with little or no social interaction and no mental stimulation is as harmful as providing inadequate nutrition or using abusive training methods. Therefore, it is in the interest of both horses and humans to understand more fully the scope of equine thinking.

“In comparison with the cognition work with other animals, little research into advanced equine learning has been completed, which is astounding considering the importance of horses to humans.”

The Foundation, she says, has been working to change that over the past 15 years, and is considered the leading researchers into advanced cognitive abilities in horses. Its most important research focuses on categorisation learning and concept learning.

“These are groundbreaking studies into advanced learning abilities and show that horses are capable of much more than many people believe.”

Dr Hanggi says that, until recently, little consideration was given as to why horses behaved as they did. “However, during the past decade, an explosion of sorts has occurred within the horse industry.”

Conferences, research articles, horse expositions, clinics, the Internet, television, magazines, books, videos, and worldwide tours had all made available educational prospects never before seen on such a large scale.

“From skilled horse handlers to wide-eyed novices, everyone has the opportunity to advance their knowledge about equine cognition, behaviour, training, and care.

“Unfortunately, as is human nature, some equine authorities take advantage of those eager for information, creating a persona of near thaumaturgy (miracle-performing ability).

“It is up to the individual to differentiate between the sincere and the artificial, to search for truth among unsubstantiated declaration, and to become an eclectic in the world of horses.”

Dr Evelyn B. Hanggi is the president and co-founder of the non-profit Equine Research Foundation (ERF), located in Aptos, California. The ERF investigates equine cognition, perception and behaviour using non-invasive methods based on positive reinforcement. Dr Hanggi and co-founder Jerry Ingersoll offer ERF learning and riding vacations and internship programmes.
Participants come from around the world to learn how horses think and perceive their world, how to form strong human/horse bonds, and how to train, handle and ride horses based on eclectic horsemanship and positive reinforcement. Off-site positive reinforcement clinics are also available.
For more information about vacation programmes or clinics, or to order ERF training tools, visit www.equineresearch.org, email EquiResF@aol.com, call (831) 662-9577, or write to Equine Research Foundation, P.O. Box 1900, Aptos, CA 95001.