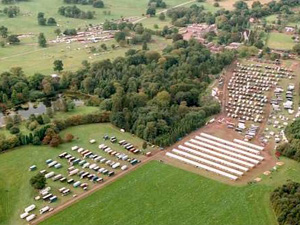 Doel recently won the 2012 Connolly Red Mills Open Intermediate under 21 series on Koyuna Sun Magic. The pair finished in the lead on a score of 49 in the hotly contested class where time across country proved critical. The second placed Young Rider combination was Germany’s Franziska Keinki riding Lancaster 149 to finish on a score of 58.1. In third place was Tom Grant with Leamhchoill Drifter on 59.5.

Speaking about his win, Doel said: “He was awesome today and went so well throughout the week. He pulled me the whole way around the cross country and really motored. It has been tough to pick myself up after the Young Rider Europeans so coming here and being so successful at Weston has been fantastic.”

Weston Park International played host to a multitude of classes, including the introduction of the inaugural KBIS Festival of Youth.

Harriet Deeming, aged 17 from Rotherham, (South Yorkshire) representing  the Midlands U-18 region, took the KBIS under 18 individual title with her ride Avanti II. They remained at the top of the leaderboard after the first phase and went on to finish on their dressage score of 42.40.

Runner-up was Charlotte Barbour riding Gran Sho on 46.6,with Jessica Watts in third with Colanski. They added nothing to their dressage score of 47.6.

Groups of ten riders from each of the British Eventing Under 18 regions were selected to compete in regional teams. The Midlands region won the team competition on a collective score of 189.6. The team members were: Harriet Deeming on Avanti II, Charlotte Barber, Gran Sho, Jessica Watts, Colanski, and Tom Pease, Daydream.

The British Charles Owen Pony programme is for riders aged between 12 and 16 riding ponies between 142cm and 148cm (14hh – 14.2hh) with the 3DE competition held at one star level.

Several prestigious awards were given out at Weston Park in celebration of this year’s European Championship achievements.

Sophie How received the Hubert Allfrey trophy for her outstanding performance at the Junior Europeans in Strzegom, Poland, where she was crowned both individual and team gold champion.

The youngest of the award winners was Louisa Nesbitt, who was awarded with the Jane Rook trophy for best individual performance at the Pony Europeans where she brought home both team and individual silver. Alice Bibby was awarded the Walnut trophy for the highest placed rider at the Pony Club and Under 18 Championships combined.