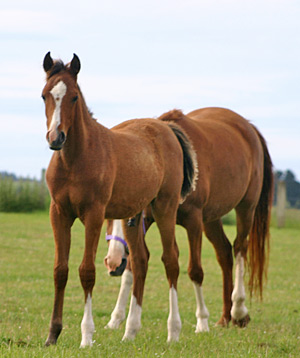 A fixed-time insemination protocol described by researchers from Brazil could encourage greater use of frozen semen in equine reproduction.

One of the reasons frozen semen is not more widely used for breeding mares is the need for insemination to occur close to the time of ovulation. This necessitates repeated ultrasound examinations when the mare is in season, making the technique time-consuming and labour intensive.

For artificial insemination with frozen semen to become more widespread, a simplified routine is needed that is less labour intensive, but does not sacrifice fertility.

Bruno Ribeiro Avanzi and his colleagues at the Department of Animal Reproduction and Veterinary Radiology, at Universidade Estadual Paulista in Botucatu, used a fixed-time insemination protocol to achieve conception rates comparable with those using a more traditional approach.

The work was presented at the 6th International Symposium on Stallion Reproduction held at the University of Veterinary Medicine, Vienna, in September 2012, and has been published in the Journal of Equine Veterinary Science.

Semen from two stallions was used in the study. One stallion, a Westphalen, was of good fertility, the other, a Mangalarga Marchador (Iberian breed), was of poor fertility.

The semen was collected, processed and frozen using a standard method.

Twenty nine mares were enrolled in the study. The oestrus cycle was monitored by rectal palpation and ultrasound scanning. Once a pre-ovulatory follicle of at least 35mm diameter was present, each mare received an injection of the gonadotrophin-releasing hormone deslorelin acetate.

Growth of the follicle was monitored every six hours, starting 18 hours after the deslorelin.

All mares were inseminated into the tip of the uterine horn adjacent to the follicle.

The less fertile stallion achieved pregnancy rates of 35.7% (5 from 14 horses) when bred 6 hours after ovulation and 21.4% (3 of 14 horses) for inseminations performed 40 hours after induction of ovulation.

The researchers conclude that insemination at a fixed time after ovulation induction is efficient. “The present data supports the feasibility of equine frozen semen as a technology to be widely used and spread since it reduces mare management and costs.”

The research was funded by the Foundation for Research Support of the State of São Paulo.