Horses might be a useful model for studying animal depression and provide insights into the human condition, French researchers suggest.

Scientists at the University of Rennes 1 came to the conclusion following what they described as a pioneering study.

Researchers Carole Fureix, Patrick Jego, Séverine Henry, Léa Lansade and Martine Hausberger set about evaluating the potential of domestic horses in their usual environment to serve as an animal model for depression research.

The researchers, whose findings have been published in the open access journal, PLoS ONE, said recent reviews had questioned current animal models of depression, in which depression had been induced.

The need was recognised for models of mood disorders based on animals living under natural conditions, they said. 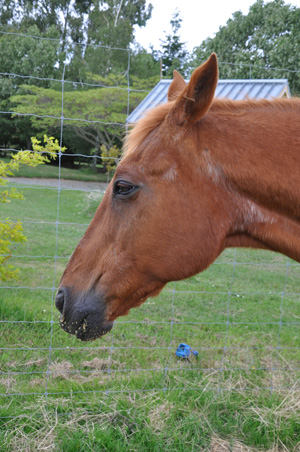 The five researchers observed the spontaneous behaviour of 59 French riding-school horses in their home environment.

“Our observations of horses in their usual domestic environment have led us to spot individuals displaying a particular behavioural and postural profile that presents strong similarities with a ‘depressive syndrome’,” they said.

They focused on what they called immobility bouts of apparent unresponsiveness, in which the horses demonstrated a withdrawn posture. The researchers evaluated the horses’ responsiveness to their environment and their anxiety levels, and analysed plasma cortisol levels – a key indicator of stress.

Twenty-four per cent of the horses showed the withdrawn posture, also characterized by a fixed gaze, head and ears fixity – a profile that suggested a spontaneous expression of “behavioural despair”, the researchers said.

The withdrawn horses all belonged to the same breed – French Saddlebreds – and females were over-represented.

Domestic horses, for example, may face social and space restriction in their daily lives. They may have to work on a daily basis and have ‘interpersonal’ interactions with a ‘boss’ who is the human who manages or rides them.

“Horses’ studies, mimicking in animals conditions in which human depression is known to occur, might then open a ‘window’ onto the complex aetiology of human depression,” they wrote.

The researchers said the withdrawn posture is characterized by a similar height between the horse’s neck and back and a stretched neck.

“This posture is distinguished from postures associated with observation of the environment (for which the neck is higher), and resting, when eyes are at least partly closed and the horse’s neck is rounder. Special attention was paid to eye and ear position.

The animals responsiveness to touch was also observed. Withdrawn horses were found to be less responsive.

Other unusual features of “withdrawn” horses were the absence of ear and head movements, and a fixed gaze.

In all, 24 per cent of the 59 horses from riding school were observed displaying at least once the withdrawn posture (standing with eyes open, stretched neck, similar height between neck and back) up to four times each in 30 minutes.

“As for human depression, horse ‘depression’ corresponds to a multifaceted syndrome: apathy and loss of interest, lower reactivity but higher anxiety.

“These horses surprisingly displayed higher emotional responses when facing a challenging situation (novel object in a familiar environment), suggesting, as in depressive humans, a higher level of anxiety.” 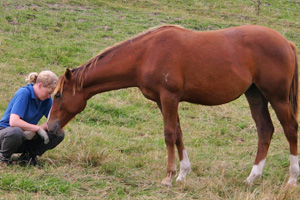 The researcher said that horses’ depressive states may reflect genetic inputs – as one breed, the French Saddlebred, was over represented in thee sample – and environmental factors certainly had an effect.

The prevalence of females displaying this syndrome was another intriguing convergence with humans, they noted.

“These results open a promising line of investigation of what impaired welfare states could look like in horses.”

They said that while considerable attention had been paid to vices, little interest had been placed on chronic states where horses ‘switch off’, becoming unresponsive and apathetic.

“Moreover, it has been recently suggested that negative experiences linked to training may add to the effects of management style … and lead to behavioural despair in horses.

“Our results suggest that estimations of gaze or body fixity and of body posture might indicate depressive-like state.”

Horses, they concluded, may well ultimately prove to be a particularly useful animal model of human depression.

The full study can be read  online.

One thought on “Researchers probe nature of horse depression”