Thought the horse sports at the Olympic Games of London 2012 were over? Nope, not yet.

The Modern Pentathlon gets under way today, and part of the five-pronged challenge to the event is for competitors to jump an unfamiliar horse over a 12-fence, 1.3m course.

The event has its roots in a 19th-century legend, and athletes are challenged to complete five very different elements in a single day. The story goes that a young French cavalry officer was sent on horseback to deliver a message. To complete his mission, he had to ride, fence, shoot, swim and run – the five challenges that face competitors in Modern Pentathlon today.

The sport first appeared at the Stockholm 1912 Olympic Games, while the women’s competition made its debut at Sydney 2000.

At London 2012, the men’s Modern Pentathlon [results] is on August 11, with the women’s competition taking place the following day.

The competition starts with fencing in the Copper Box followed by a 200m swim in the Aquatics Centre. The athletes then leave the Olympic Park for Greenwich Park, where they will complete the show jumping course.

The day concludes with the combined event, in which competitors complete a 3km run, including stop-offs at shooting points where they must hit five targets.

In this exciting final element, the day’s competition is decided as the first to cross the finish line takes the gold medal.

The sport, invented by the founder of the modern Games, Baron Pierre de Coubertin, celebrates its Olympic centenary in London having made its debut at Stockholm 1912.

It has been under pressure to modernise, and since 1996 the fencing, swimming, jumping, running and shooting have all taken place on the same day, having originally been staged over four or five days.

That was the format for the last Olympic Games at Beijing 2008, but in 2009 the sport changed fundamentally with the introduction of the combined event.

The running and shooting elements were put together into a biathlon-style event, which now provides an exciting and unpredictable finale.

Last year, the decision was made to change from air pistols to laser guns, making the sport more accessible and safer for children.

It has been a challenge for the athletes to adapt but Dr Klaus Schormann, the President of international governing body the Union International de Pentathlon Moderne (UIPM), said the best will still come out on top.

Schormann said: “What is very good is these athletes that are sitting here and also other athletes performing at the Olympic Games, they won in the past and they’re winning again.” 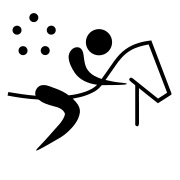 Forty horses have been selected for the 72 athletes in both sections, and the pentathletes have had the chance to try out the horses at Greenwich Park, in a 20-minute familiarity session.

The horses have come through a tough selection process. Each horse must be well able to complete a 12 jump show jumping course with obstacles up to 1.3m high with an unfamiliar rider. Equally critical is that horses have the right temperament to cope in front of the 23,000 spectators who will be crammed into Greenwich Park on Saturday and Sunday.

Dominic Mahony, Team GB Modern Pentathlon Team Leader, points out that even among the experienced pairings in the Olympic show jumping competition, some horses were affected in this environment.

“How you get on with the horse is vital,” he says. “Horses can have bad days as well as athletes.”

The 90 horses selected from dealers have been whittled down to 40 competition horses and 15 training horses for the London 2012 Olympics. The process has included horse selection events where the horses were ridden by modern pentathletes on a similar surface and course to Greenwich Park.

All of the selected horses have been in stables at the venue since August 3 and have had familiarisation sessions with their owners at Greenwich Park, while the athletes will have had four opportunities to ride the horses in the build up to the event.

Nineteen of the horses have been supplied by dealer Joanna Aston. “It’s fantastic,” she says. “I am very proud of my team and of course my horses. It’s an awesome opportunity to show them off to the world.

“The past year we have been watching them very closely getting them ready and they have just turned out beautifully. Most of them jump at an international level and one of GB’s top juniors Chloe Aston rides them regularly.”

Nothing has been left to chance in preparing these horses, giving each of the athletes the best possible opportunity of success in the competition.

London 2012’s Modern Pentathlon Competitions Manager, Peter Hart, and his team had to remove the dressage course that’s currently set up at from Greenwich Park and create a venue for show jumping, shooting and running – in 24 hours.

“I sometimes think Pierre de Coubertin invented this sport to challenge the organizers,” he said.

Other names who are expected to challenge include France’s three-time world champion Amelie Caze and 2011 world champion Viktoriya Tereshchuk of the Ukraine.

The men’s sport is dominated by Russia, who are represented in London by world champion and top-ranked Aleksander Lesun and Andrei Moiseev, who is bidding for an unprecedented third consecutive Olympic gold medal.

With two athletes from each country allowed to compete, Russia had to leave Ilia Frolov and Serguei Karyakin, who are ranked third and fifth in the world, behind. The Russian quartet are joined in the world’s top five at number four by Hungary’s former world champion Adam Marosi.

Seventh-ranked Ricardo De Luca put himself in contention with victory at the European Championships in July, while the 26-year-old holds the world record for the combined event at 9:41 for 15 successful shots and 3000m of running.

De Luca said: “I don’t think about the other athletes. I think about myself, my training and my possibilities. On Saturday I know that, if I perform at my maximum ability, I have the chance to do something good.”

Reigning women’s champion Lena Schoneborn of Germany will go into Sunday’s women’s competition as one of the favourites, having added numerous World Cup wins to her Beijing 2008 gold, as well as the European Championships and World Cup Final titles last year.

The 26-year-old has high hopes, although she insisted her Beijing 2008 title is irrelevant to her London 2012 chances, saying: “Quite a lot has happened in the last four years.

“I took the combined event as a new challenge, so for me this is a completely new competition. So far I don’t have the title of 2008 in my mind. It’s everything back to zero.

“I try to focus on the way and not the destination. Of course, I have high expectations on myself because everything’s been going well and I want to stay at that level.”