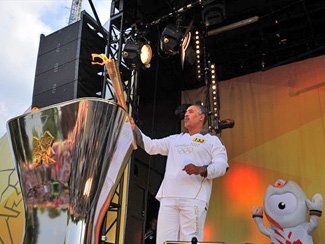 An international racing official has called on Olympic officials to disclose the names of athletes given exemptions to use drugs in London.

The president of Racing Commissioners International, Ed Martin, noted that some athletes scheduled to compete at the London Games were permitted  to compete with performance-enhancing drugs in their systems.

He called on Games officials to disclose the names of the affected athletes, the competitions they are in, and the drugs in their systems.

Martin, in testimony on July 13, told a US Senate Committee that the World Anti-Doping Agency (Wada) has a little-known policy that permits Olympic athletes to compete with a variety of performance enhancing substances in their bodies, something that is not allowed in horse racing except for a treatment to mitigate bleeding.

Calling it an “Olympic-sized deception”, Martin said: “Olympic fans won’t know who, in what events, or the drugs in use as there is no disclosure.”

The perception, he said, is that the Olympics are drugs free. Media accounts have largely ignored Wada’s mandate of a process where athletes can obtain a therapeutic use exemption allowing them to compete with prohibited performance-enhancing substances.

An Olympic athlete is free to submit an application supported by their doctors and approvals are largely controlled by his or her home Olympic committee.

“If this standard were applied in horse racing, one could argue it would be comparable to allowing a horse owner to grant an exemption for some of his horses to run on drugs,” Martin said.

According to the 2010 Annual Report posted on the website of the US Anti-Doping Agency (USADA), the most requested exemption was for beta-2 agonists (clenbuterol), followed by outright stimulants.

Exemptions were requested for anabolic agents, corticosteroids, narcotics, hormones, and platelet-rich plasma. Of those applications considered, 155 were approved and 43 denied.

“In horse racing there is no process to allow for therapeutic use exemptions,” Martin said.

“The trainers of horses found to have such substances in their system on raceday are found to be in violation and sanctioned.

“The only exception [in America] is for a therapeutic medication to mitigate the effect of exercise induced pulmonary hemorrhage.

“Unlike the Olympics, there is disclosure in racing and horses so treated are listed in the program for everyone to see.”

In addition, Section 2.4 of the World Anti-Doping Code permits athletes to miss a drug test without consequence. It is only after the third time someone has missed a test that it becomes an actual violation. In horse racing, no race-related tests are allowed to be missed or declined.

“In 2010 US racing regulators sent over 330,000 samples to the testing laboratory. 99.5 per cent were found to have no prohibited substance despite racing regulators testing for more substances at deeper levels than any other sport. When a medication violation was found, the substance was more often than not therapeutic and theoretically might have been allowed if racing emulated the Wada Olympic standards,” Martin said.

According to the USADA’s annual report for 2010 there were 38 drug rule violations out of 8031 tests. That percentage of violators is roughly the same as in horse racing.

“The big exception is that racing does not have an undisclosed exemption for therapeutic performance enhancements so not everything being used in the Olympics is disclosed,” he said.

“When you look at the facts, the perception that next week’s games will be drug free and horse racing is drug ridden is an Olympic-sized deception.

“The challenge is real for both, but horse racing’s transparency and hard line against virtually all performance enhancing therapeutics may explain why some think racing’s problem is bigger than it is,” he concluded.