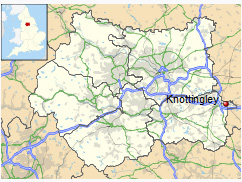 A horse trapped in an underground pump chamber for five days in West Yorkshire, England, has emerged unhurt after being dug out by firefighters.

Eleven firefighters set about digging the two-year-old out, which included the use of noisy cutting gear to remove concrete from the well’s structure.

The male cob had disappeared from his pasture in Knottingley, West Yorkshire, and could not be found. His owners eventually caught wind of his whinnies and found him in the disused pump chamber.

He is understood to have fallen through the top of it to become stuck.

Firefighters from West Yorkshire Fire & Rescue dug down two metres to free him. As well as sedation, his ears were filled with cotton wool so the noise of the concrete cutting equipment would not distress him.

He was finally walked to safety, hungry and thirsty, but otherwise OK.