A sheriff’s deputy in Florida has resigned after her arrest for animal cruelty over the care of her miniature horses.

The Hillsborough County Sheriff’s Office reported on Tuesday that it has arrested Deputy Pamela Belo, 48, a 23-year veteran of the force.

The office said that one of the horses, named Warrior, died as a result of the neglect.

The office said that on July 3 Belo voluntarily surrendered her four miniature horses to RVR Horse Rescue in Riverview.

Due to the condition of the animals, the rescue center contacted the Hillsborough County Sheriff’s Agriculture Unit.

Detectives from the unit responded and immediately began a criminal investigation.

They allege that between July 2011 and July 2012, Belo deprived food and nourishment to two of the four miniature horses while in her custody and care.

Belo’s action caused the two horses to suffer from malnutrition over an extended period, such that they lost a high percentage of body weight. As a result, one of the miniature horses died of starvation, they allege.

The second horse is expected to recover.

Belo, who was assigned to the sheriff’s office community outreach division, was suspended without pay. She subsequently resigned.

Detective Larry McKinnon told Horsetalk the office’s agriculture detectives moved quickly and made the arrest as soon as the results of the necropsy had been received.

He said staff at the office were distressed over the case, more so because a  deputy was allegedly responsible.

“Many deputies have been dropping off horse feed and money all day. They just feel awful!” he said.

They said they visited the property where the four miniatures lived as a result of a call from a concerned veterinarian.

They found Warrior, who was reported to have  fallen off a porch, lying on the ground.

“He had a little bit of grain that was spread out in the dirt next to his head, and a small bowl of water that he couldn’t lift his head high enough to drink out of.

“We found his feet to be in deplorable condition, his back hooves were nearly 4 inches longer than they should have been, which would make it difficult, if not quite impossible for him to stand on his own.

“In addition to Warrior, there were three other minis on the property, another stud named Spirit, a mare named Sandy, and Sandy’s 15-month-old filly named Lily.

“All four of them were very emaciated, with their ribs and hips very predominant We convinced the owner that it would be in the best interest of all the horses to be taken away from their current situation and brought here to RVR, and once they were able, to be adopted out to a loving, forever home.

“Spirit, Sandy and Lily were all loaded up on the trailer without too much difficulty, although it appeared that none of them were very used to being handled, and Lily seemed like she’d had no human handling at all. 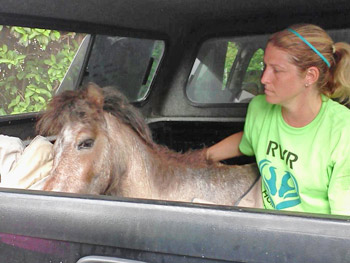 “Since Warrior was unable to stand on his own, we had to improvise a sling to lift him up into the bed of the truck, with Michelle riding along with him to keep him safe and comfortable, as well as keeping him company.

“He was quite a trooper, not giving us any trouble while picking him up and getting him stowed comfortably in the truck. He seemed to have a fighter’s heart, and a willingness to give all he had.

“As soon as we arrived back at the ranch, we got him laying comfortably in a stall with plenty of water and some fresh hay to nibble on. We were able to get him laying sternal with just the slightest bit of help and support, so he was able to eat and drink at his leisure.

“We also got a farrier to make an emergency visit to get his hooves trimmed down so he would be able to stand without any pain in his feet. Using our makeshift sling, we were able to get him standing, and we could slowly lower the sling so he was standing under his own power, which he could do for about 15 to 20 minutes at a time, before practically collapsing from sheer exhaustion.

“Every three hours, we would stand him up for a short time, then lay him back down on his other side, hoping to prevent any organ damage from the constant pressure of laying in the same position. A few of us were up practically all night long keeping an eye on him and “flipping” him every three hours.

The next morning, although his spirits seemed greatly improved, we saw little change in his overall condition, and decided we needed a proper sling for him, so he could be kept in an upright position more easily, and for longer periods of time.”

Ultimately, on the evening of July 4, volunteers loaded him into the back seat of a pickup and drove him to a rescue in Ocala that specialized in minis, and had a sling on site.

“Once we got to Beauty Haven Horse Rescue, we got him out and comfortable in his new stall. A vet was on site to check him over, administer additional fluids, etc.

“After making sure he was comfortable and stable, with heavy hearts, we said our farewells. We all kept very close tabs on his condition, receiving updates several times a day from Beauty Haven.”

Warrior held steady for several days, but was not  gaining strength and health.

“After a few days, we got the call we’d been dreading. News that he had crossed over the Rainbow Bridge into the Heavenly Herd.

“We all mourn his loss, and his warrior’s spirit left a huge mark on everyone who interacted with him. We all bemoan the fact that we weren’t called out to save him sooner, believing that had we been, it very well might have made the crucial difference in his survival.

“He knew love and affection in his last days. Rest now, gentle Warrior, we here will take up the fight for you now.”