Federal authorities should have acted long ago to avert the need for an emergency muster in Nevada’s drought-stricken Jackson Mountains, wild horse advocate Laura Leigh says.

Leigh is monitoring the emergency roundup, which she says is essential to avert the die-off of wild horses that occurred in the same area in 2007.

However, she says the Bureau of Land Management should have acted much earlier to avert the decline in the condition of the horses and the need for an emergency roundup.

The roundup started on June 8, about a month earlier than scheduled amid fears the horses would die through a lack of forage and water. However, the timing puts it at the peak of the foaling season, and horse advocacy groups have voiced concerns that heavily pregnant mares that are forced to run could abort their foals.

They have also voiced concerns about the running of new foals and the potential risk of injury and death.

Leigh, the founder of Wild Horse Education, says the bureau should have acted far sooner to avert the need for an emergency roundup in the drought-hit southern portion of the herd range.

“About two years ago they should have officially restricted livestock use, not just in the southern part, but in the northern part as well.”

This, she said, would have encouraged the horses to move north, where forage was more plentiful.

She said the bureau had been hauling water to the horses, but should have erected the panels used in bait traps at the same time to get the horses used to them.

Had it done so, bureau contractors could have started bait-trapping the horses from last month – a far better way of capturing pregnant mares and foals, she said.

The bureau is targeting about 630 of the 930 or so horses on the range, in an operation likely to take a fortnight.

Leigh, who calls Nevada home but spends much of her time living out of her vehicle while travelling the western rangelands to monitor roundups, says the Jackson Mountains had been overgrazed, which she said was a direct result of failing to restrict livestock access. 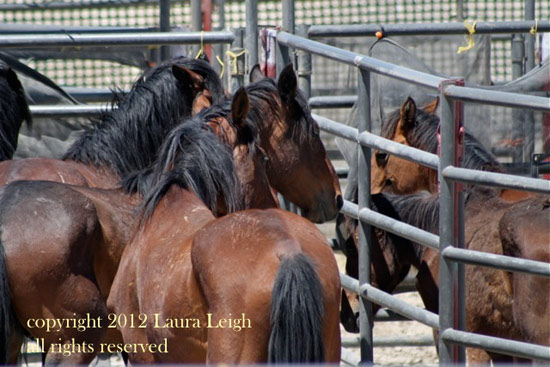 Leigh, currently staying in a hotel in Winnemucca, faces a two-hour drive each day to reach the current muster site. This drive will increase in coming days as the muster moves further north.

Leigh says she arrives at the Winnemucca district office at 5am each day and is escorted in to watch the day’s roundup activity. She watches the action from a designated area, with a bureau public affairs officer and ranger present.

Sometimes, she can be a mile from operations, requiring the use of a powerful telephoto lens.

Leigh describes a helicopter muster as a horrible cure for the problem.

“Watching these babies run is horrifying,” she said.

To date, 107 horses have been gathered and three have died. The three are listed as dying from pre-existing conditions, but Leigh said she did not concur.

Leigh said the bureau’s Winnemucca district manager, Gene Seidlitz, will be travelling into the muster zone tomorrow. She said it would provide an opportunity to discuss operational issues in a bid to ensure the roundup continued as safely as possible.

She hopes that arrangements can be made to deal with safety and welfare issues daily as they arose.

» Wild horses in the news

15 thoughts on ““Watching these babies run is horrifying””