Elderly British pony Myah found her tangle with a fallen tree a bit too much to handle, but her local firefighters were happy to help her out of her predicament.

Myah, 31, went down after getting tangled in the old tree at Brambridge Park, Eastleigh, last Friday.

Hampshire Fire and Rescue Service sent a fire engine and a multi-purpose vehicle from Eastleigh Fire Station and the animal rescue vehicle team from Lyndhurst, together with an animal rescue specialist to the scene.

“Firefighters assisted in cutting and removing the branches of the tree which was surrounding Myah to ensure that she did not receive further injury during the operation to get her back up on her feet,” Brown said.

“Crews used a sideways skid technique into clear ground before rolling the horse over. The vet assessed Myah’s injuries before she was lifted by a farmer’s tractor using a specialist harness.”

Brown said the rescue showed the importance of effective partnerships between veterinarians and fire personnel in carrying out successful rescues.

“It also shows how modern rescue techniques and approaches are improving the viability of animals in distress and the safety of everyone present at such an incident.

“Any animal, small or large, that is trapped or in distress can be potentially dangerous. It is important to try and keep the animal calm, keep humans away, and request the immediate assistance of the fire and rescue service’s specialists to rescue the animal, rather than attempting to do so themselves.”

Fellow animal rescue specialist Anton Phillips, from Eastleigh Fire Station, had come to the help of Myah on three previous occasions on this piece of land, which coincidentally is owned by his father.

“She is a very old horse who is kept as a pet and occasionally gets herself in some unusual predicaments. Myah is currently being treated with painkillers and is expected to make a full recovery from her ordeal.” 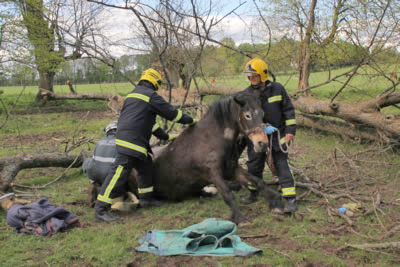 One thought on “Elderly Myah rescued from tangle in fallen tree”